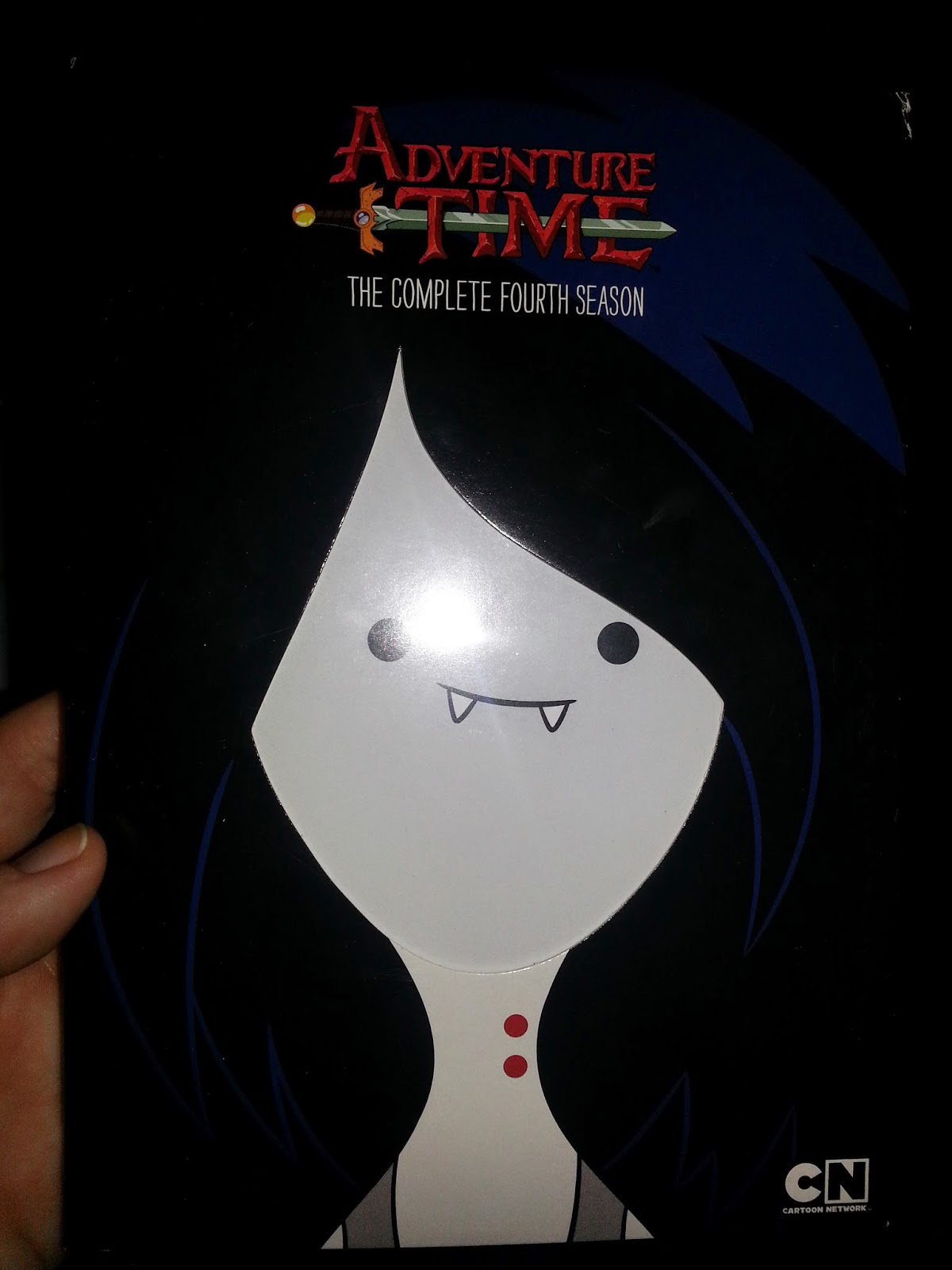 My kid's absolutely loved all these episodes and now they want to watch it all the time. I think it is because of the girl with the vampire teeth my kid's are fascinated by vampires. But it can also have to do with Halloween. All the episodes were good it kept the kid's attention for everyone. This Dvd has 26 full eposoides so the kid's didn't watch the whole thing at one time but they sure looked forward to continuing them. 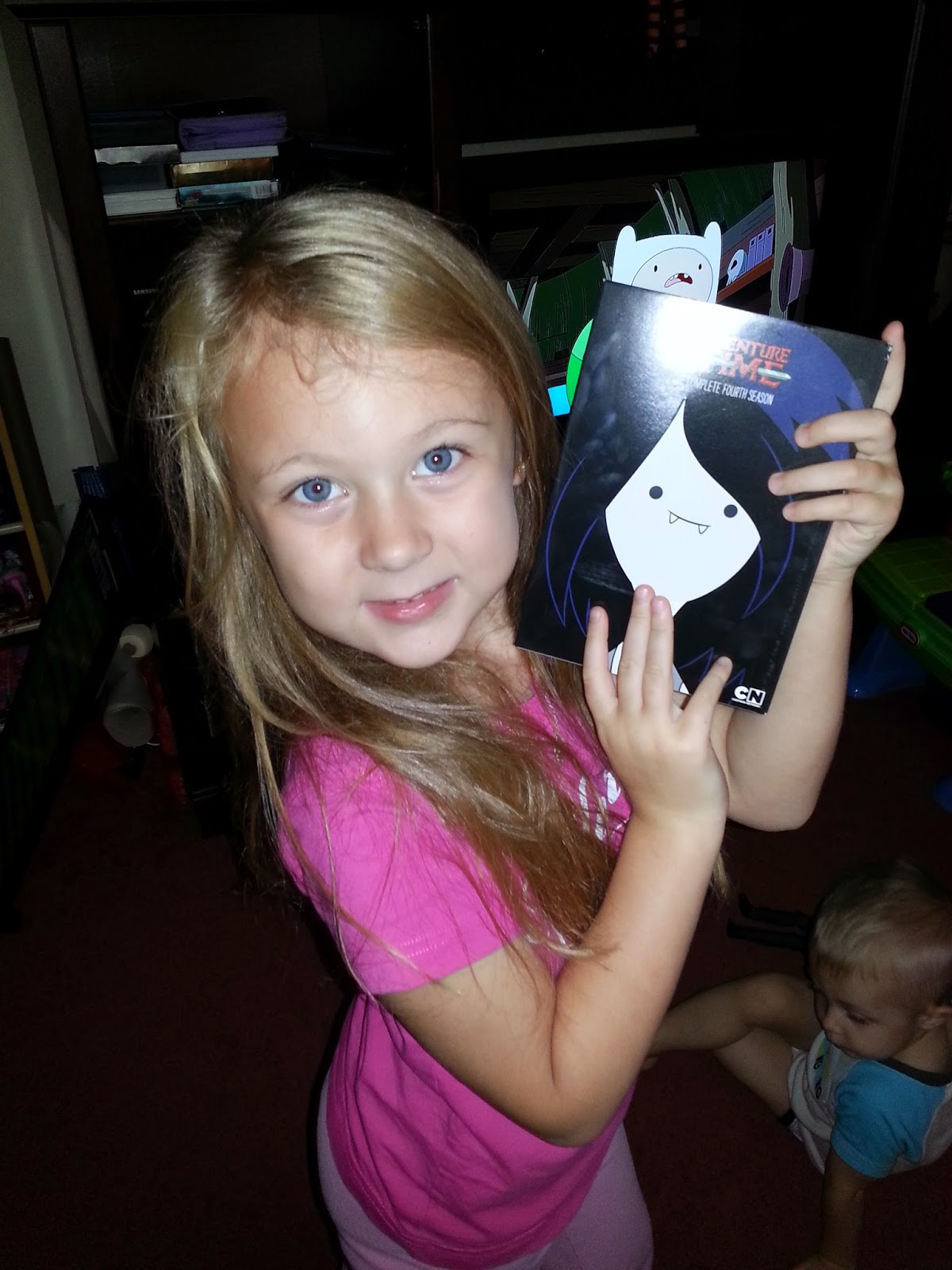 My daughter couldn't just show you the cover she had to show you the whole thing. She was intrigued by the girl on the front when you remove the outer case she has a new hair style!! 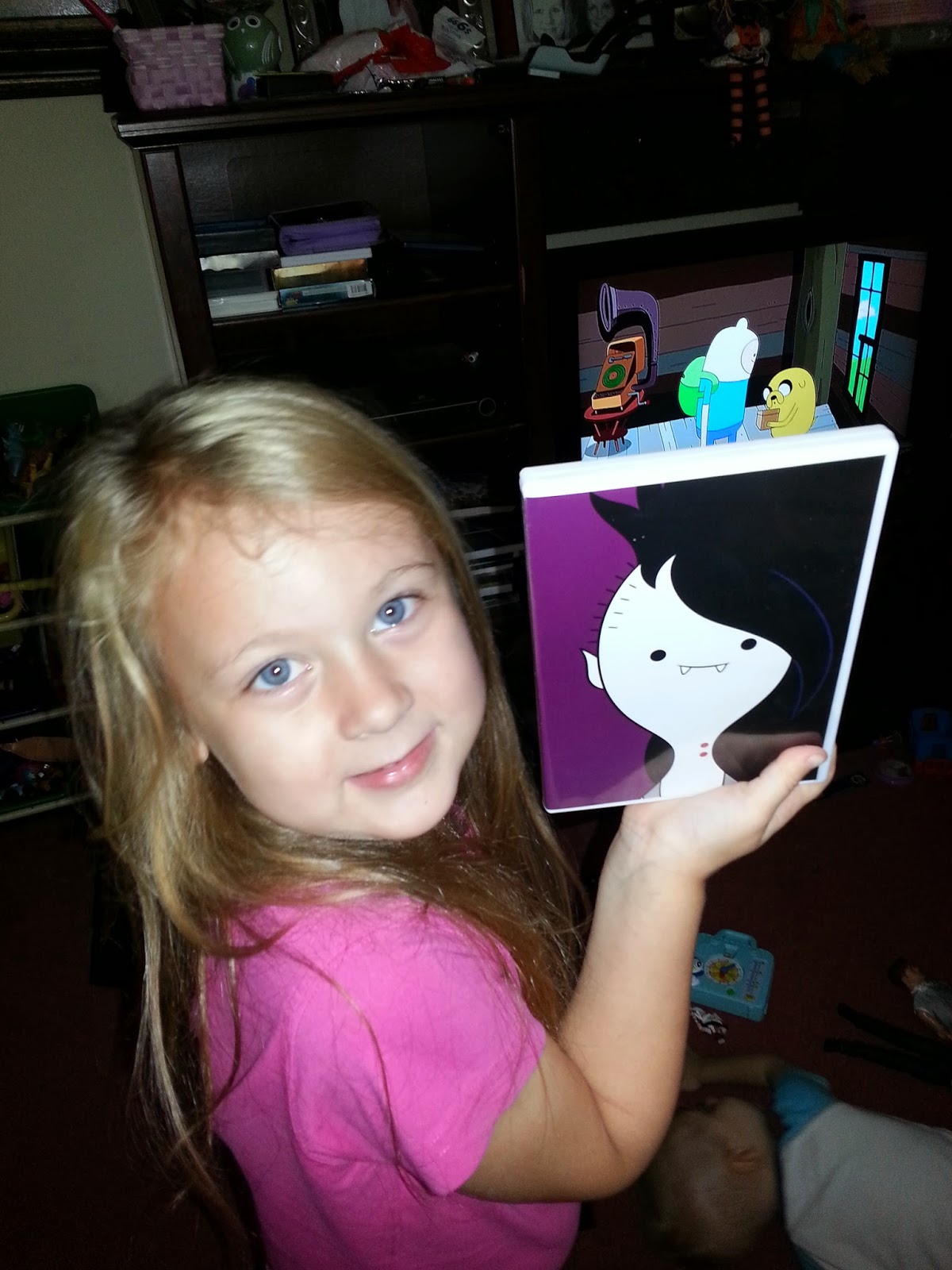 And she said Mom we have to take a picture of the back of her hair too!! 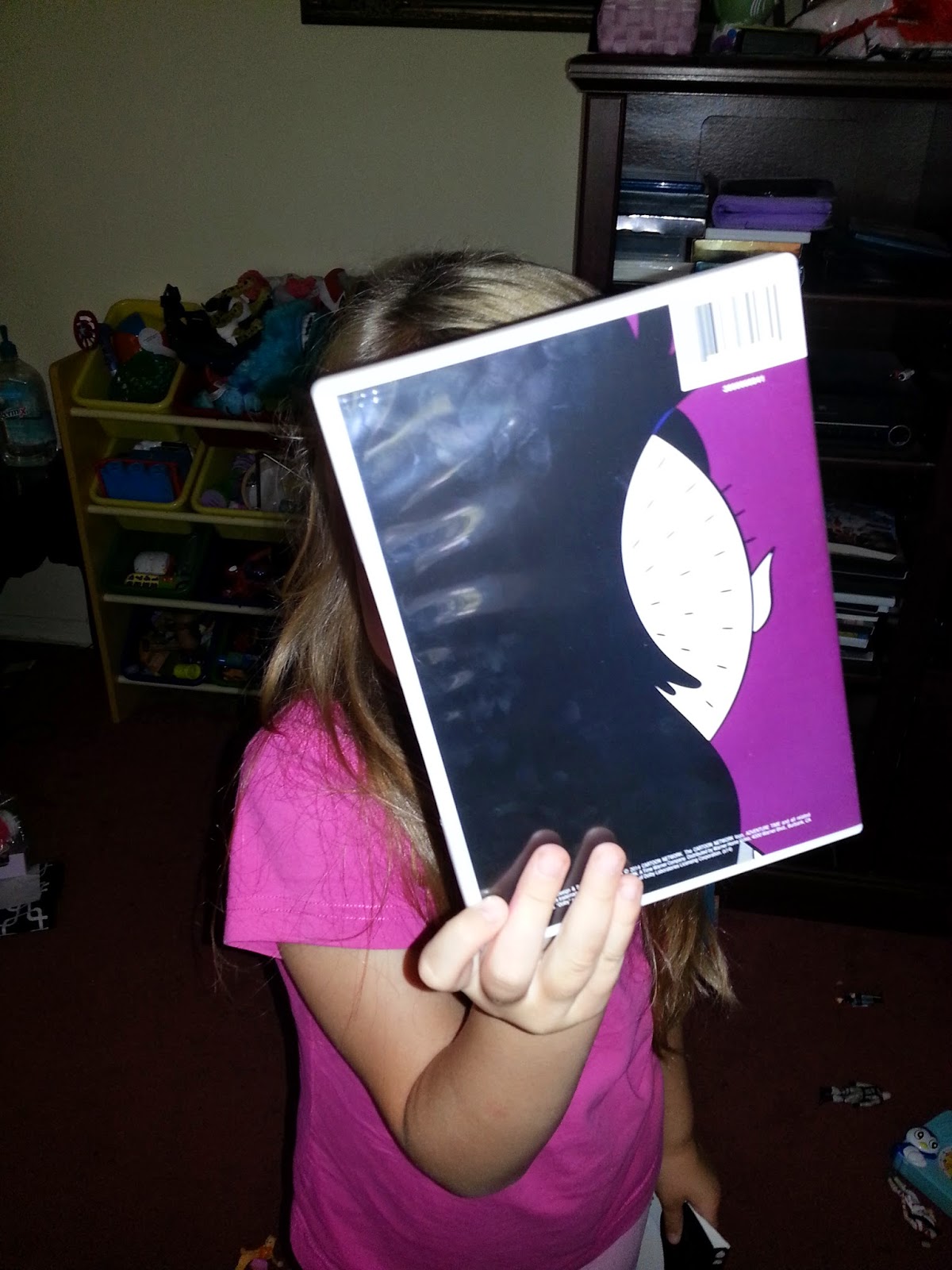 So there you have it the whole cover ha ha!!

Adventure Time is shown on the Cartoon Network.

The kid's really enjoyed all the music in this Dvd also so much they kept dancing around!! Bonus Features on Full Season Set Include Exclusive Featurette on ‘The Music of Adventure Time,’
Commentaries for all 26 Episodes and Much More

Cartoon Network today unveiled the highly-anticipated Blu-ray™ and DVD release of Adventure Time: The Complete Fourth Season. Available October 7, the two-disc DVD and single-disc Blu-ray release will feature all 26 episodes from the series’ fourth season, plus extensive exclusive bonus material. The highlight of the bonus features is a 19-minute Distant Bands: The Music of Adventure Time featurette with series creator Pendleton Ward, creative director Pat McHale, and storyboard artists Jesse Moynihan and Rebecca Sugar offering their commentary on the important role music plays in the series. In addition, each episode will feature commentary with the cast and crew, and this time, it all comes packaged in a new collectible Marceline slipcase, a must-have addition to Adventure Time fans’ collections. The Blu-ray and DVD editions will be available for the suggested retail prices of $32.07 and $26.95, respectively.
In the fourth season of the Emmy® Award-winning series created by Ward and produced by Cartoon Network Studios, fans witnessed Finn become infatuated with the Flame Princess in “Hot to the Touch,” anxiously looked on as Finn and Jake escaped from the clutches of Marceline’s demon father, Hunson Abadeer, in “They Went to the Nightosphere,” and followed alongside BMO on its journey to recover Finn’s missing sock in “BMO Noire.”
Currently in its sixth season on Cartoon Network and already renewed for a seventh, Adventure Time is the #1 rated show among boys 6-11 and is the second highest rated show among boys 6-14 and kids 6-14, according to Nielsen Media Research. As Cartoon Network’s #1 show, it has been lauded by critics, received multiple industry awards and has emerged as a fan-favorite brand for fans of all ages since its April 2010 debut. Supported by a highly-passionate fan base that includes more than 16 million Facebook fans, the Adventure Time franchise enjoys a strong retail presence with licensed apparel, accessories, comic books, calendars and more. The wide variety of popular items available has led to more than $150 million in sales worldwide. The Adventure Time brand has also been successful on digital platforms, with the Adventure Time Card Wars mobile app outranking all other paid apps on iTunes. 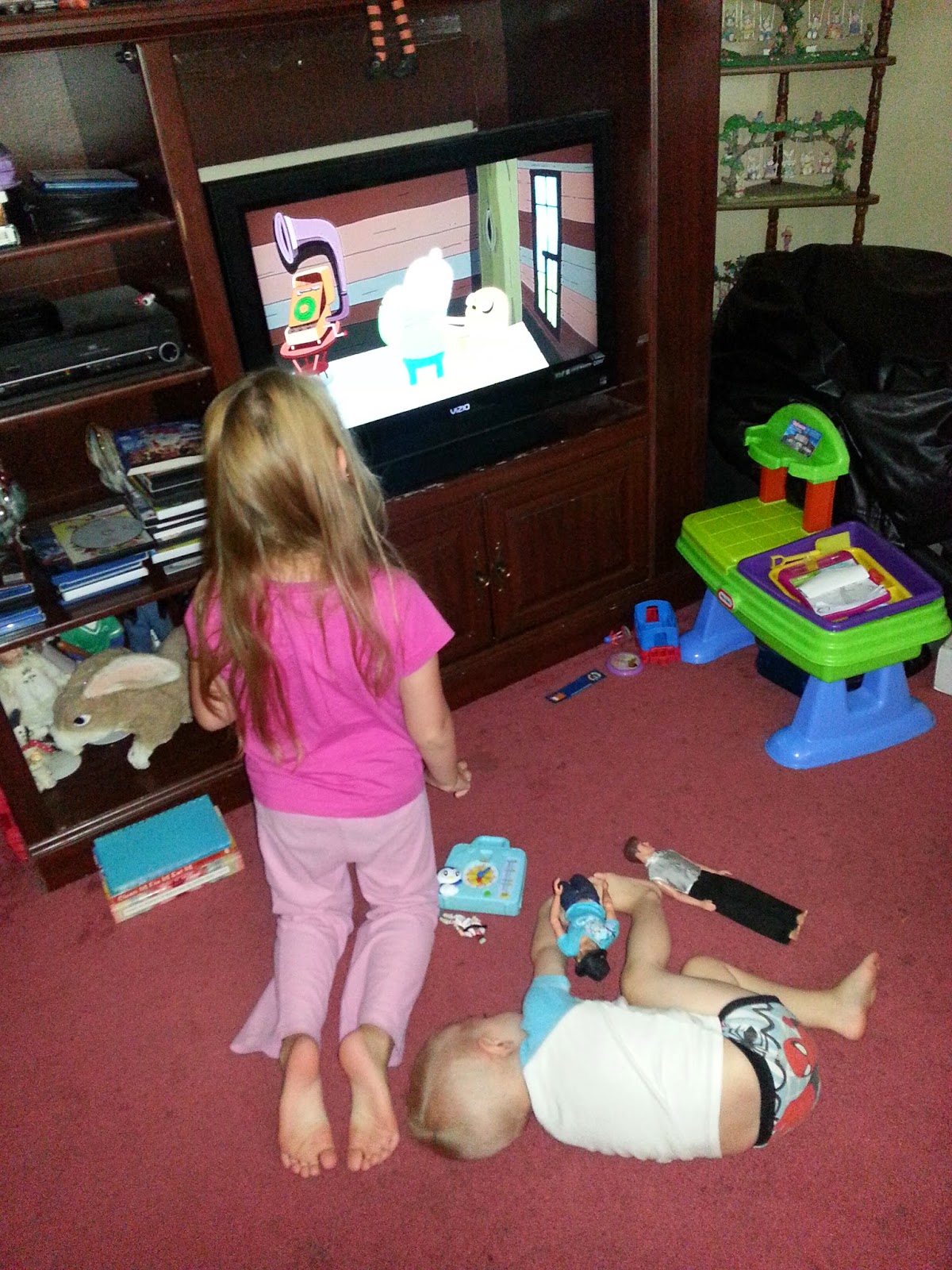