New York, N.Y., July 24, 2014 – On the tail of a wildly successful run of MY LITTLE PONY EQUESTRIA GIRLS the movie in 2013, Screenvision has teamed up with Hasbro Studios and Shout! Factory to bring the full-length feature MY LITTLE PONY EQUESTRIA GIRLS: RAINBOW ROCKS to more than 300 cinemas across the U.S. and Canada beginning September 27. Information on listings and links to book tickets can be found at mlpeg.com.

MY LITTLE PONY EQUESTRIA GIRLS: RAINBOW ROCKS the movie finds Canterlot High (CHS) hosting a musical showcase, and Rainbow Dash, Applejack, Pinkie Pie, Rarity, and Fluttershy are going to be performing with their new band, The Rainbooms. But when The Dazzlings, a new girl group, arrive at CHS and convince everyone to turn the friendly showcase into a Battle of the Bands, tensions mount between the competing musical acts. A now-reformed Sunset Shimmer realizes that the Dazzlings may not be ordinary girls and are after something far more sinister than just being named Best Band at Canterlot High. The Rainbooms call on Princess Twilight to restore harmony to their world to help them perform a musical counter-spell so that they can win a battle that now determines the fate of the entire school! 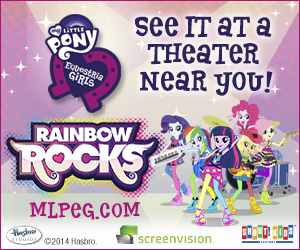 “Screenvision and Shout Factory have been wonderful partners and we're looking forward to once again working with them to bring MY LITTLE PONY EQUESTRIA GIRLS fans the next installment of the beloved franchise,” said Stephen Davis, president, Hasbro Studios and Global Entertainment & Licensing. “We’re thrilled for audiences to see the spectacular MY LITTLE PONY EQUESTRIA GIRLS: RAINBOW ROCKS musical numbers performed by their favorite MY LITTLE PONY characters on the big screen coming this Fall.”

“We had great success with MY LITTLE PONY EQUESTRIA GIRLS the movie last year, and are excited to continue this partnership with Shout! Factory and Hasbro, strengthening our offering of children’s programming for our exhibitor partners,” said Darryl Schaffer, Executive Vice President, Operations and Exhibitor Relations, Screenvision.

“We are very excited to partner with Hasbro Studios and Screenvision in bringing this next chapter of MY LITTLE PONY EQUESTRIA GIRLS to fans. My Little Pony is an internationally beloved brand and this great family movie is a perfect fit for theatres,” said Garson Foos, President of Shout! Factory.
About Screenvision:
Headquartered in New York, N.Y., Screenvision is a national leader in cinema advertising, offering on-screen advertising, in-lobby promotions and integrated marketing programs to national, regional and local advertisers and providing comprehensive cinema advertising representation services to top tier theatrical exhibitors presenting the highest quality moviegoing experience. The Screenvision cinema advertising network is comprised of over 14,200 screens in 2,200+ theatre locations across all 50 states and 94% of DMAs nationwide; delivering through more than 150 theatrical circuits, including 6 of the top 10 exhibitor companies. For more information: www.screenvision.com 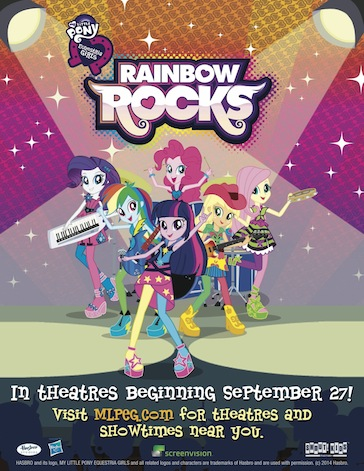