I'm so excited to let you know about some amazing movies coming out this year 2018. You're in for a treat. Be on the lookout for some of your favorites. 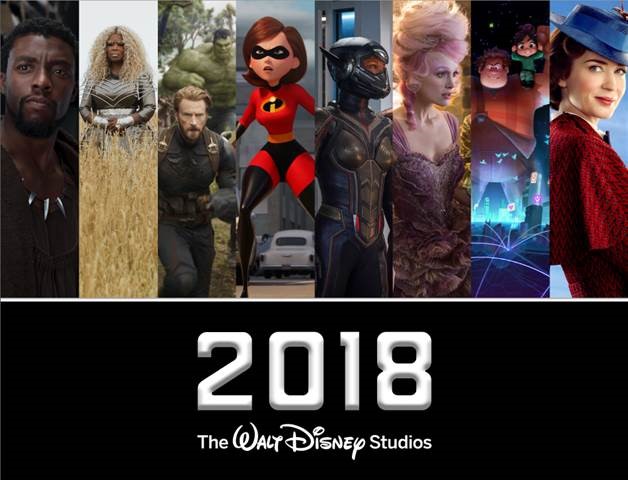 Marvel Studios’ “Black Panther” follows T’Challa who, after the death of his father, the King of Wakanda, returns home to the isolated, technologically advanced African nation to succeed to the throne and take his rightful place as king. But when a powerful old enemy reappears, T’Challa’s mettle as king—and Black Panther—is tested when he is drawn into a formidable conflict that puts the fate of Wakanda and the entire world at risk. Faced with treachery and danger, the young king must rally his allies and release the full power of Black Panther to defeat his foes and secure the safety of his people and their way of life. 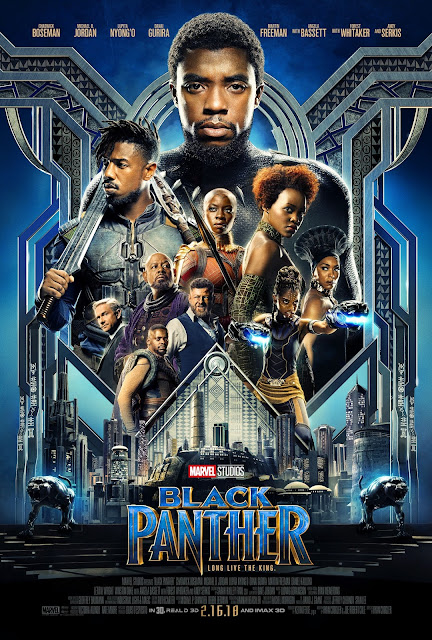 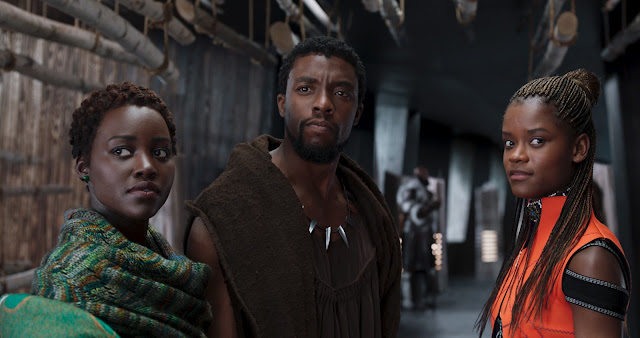 From visionary director Ava DuVernay comes Disney’s “A Wrinkle in Time,” an epic adventure based on Madeleine L’Engle’s timeless classic which takes audiences across dimensions of time and space,  examining the nature of darkness versus light and, ultimately, the triumph of love. Through one girl’s transformative journey led by three celestial guides, we discover that strength comes from embracing one’s individuality and that the best way to triumph over fear is to travel by one’s own light.

Meg Murry is a typical middle school student struggling with issues of self-worth who just wants to fit in. The daughter of two world-renowned physicists, she is intelligent and uniquely gifted, as is Meg’s younger brother, Charles Wallace, but she has yet to realize it for herself. Complicating matters is the mysterious disappearance of Mr. Murry, which has left Meg devastated and her mother broken-hearted. Charles Wallace introduces Meg and her fellow classmate Calvin to three celestial beings (Mrs. Which, Mrs. Whatsit and Mrs. Who) who have journeyed to Earth to help search for their father, and together they embark on their formidable quest. Travelling via a wrinkling of time and space known as tessering, they are transported to worlds beyond their imagination where they must confront a powerful evil force. To make it back home to Earth, Meg must face the darkness within herself in order to harness the strength necessary to defeat the darkness rapidly enveloping the Universe. 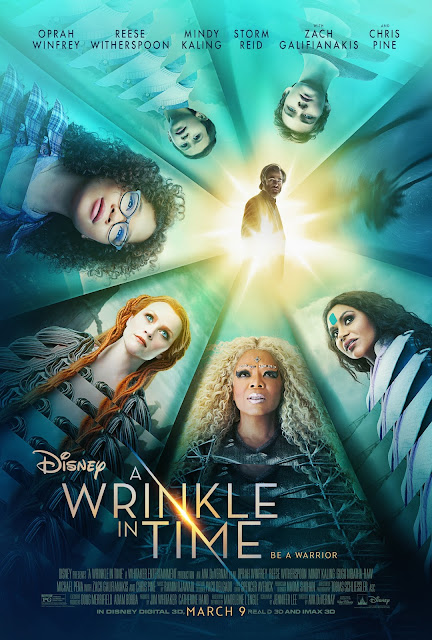 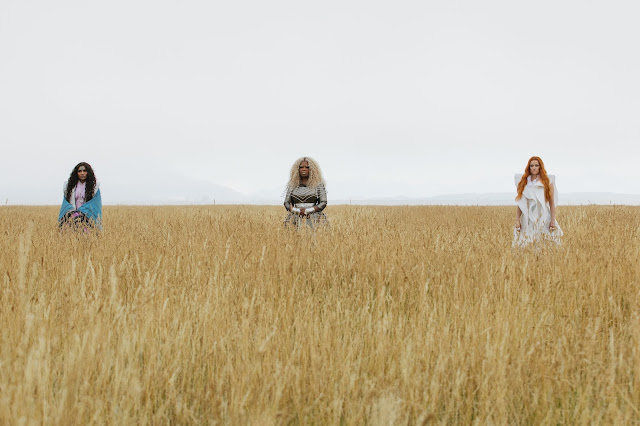 An unprecedented cinematic journey ten years in the making and spanning the entire Marvel Cinematic Universe, Marvel Studios’ “Avengers: Infinity War” brings to the screen the ultimate, deadliest showdown of all time. The Avengers and their Super Hero allies must be willing to sacrifice all in an attempt to defeat the powerful Thanos before his blitz of devastation and ruin puts an end to the universe.
Anthony and Joe Russo direct the film, which is produced by Kevin Feige. Louis D’Esposito, Victoria Alonso, Michael Grillo and Stan Lee are the executive producers. Christopher Markus & Stephen McFeely wrote the screenplay. 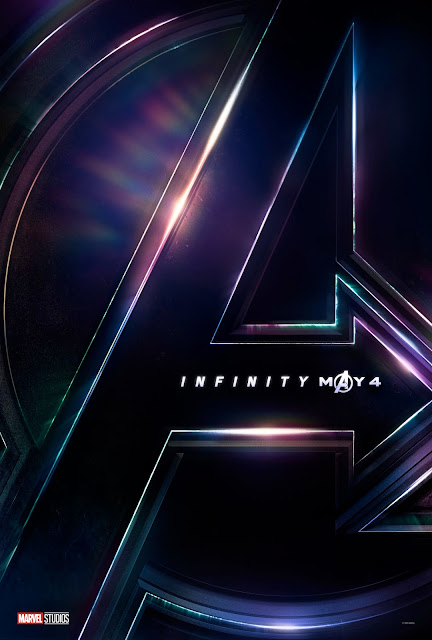 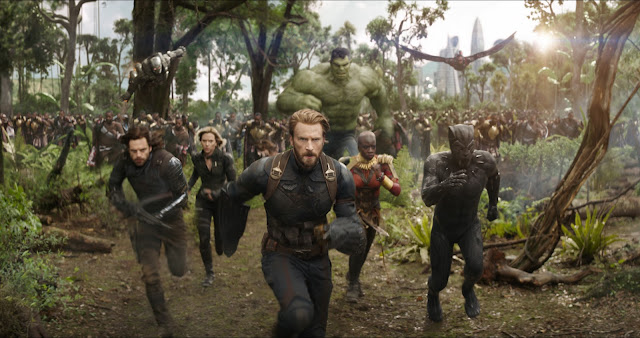 Board the Millennium Falcon and journey to a galaxy far, far away in “Solo: A Star Wars Story,” an all-new adventure with the most beloved scoundrel in the galaxy. Through a series of daring escapades deep within a dark and dangerous criminal underworld, Han Solo meets his mighty future copilot Chewbacca and encounters the notorious gambler Lando Calrissian, in a journey that will set the course of one of the Star Wars saga’s most unlikely heroes. 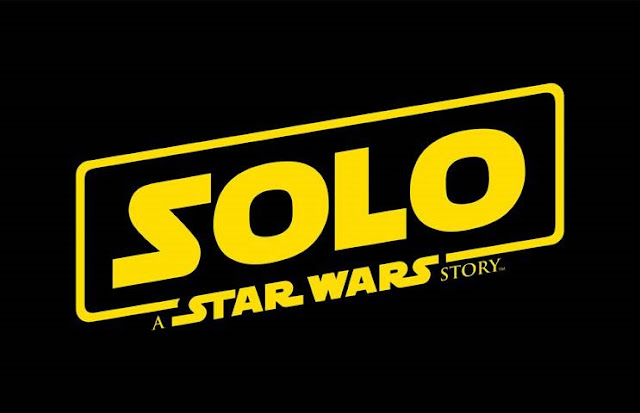 Everyone’s favorite family of superheroes is back in “Incredibles 2” – but this time Helen (voice of Holly Hunter) is in the spotlight, leaving Bob (voice of Craig T. Nelson) at home with Violet (voice of Sarah Vowell) and Dash (voice of Huck Milner) to navigate the day-to-day heroics of “normal” life. It’s a tough transition for everyone, made tougher by the fact that the family is still unaware of baby Jack-Jack’s emerging superpowers. When a new villain hatches a brilliant and dangerous plot, the family and Frozone (voice of Samuel L. Jackson) must find a way to work together again—which is easier said than done, even when they’re all Incredible. 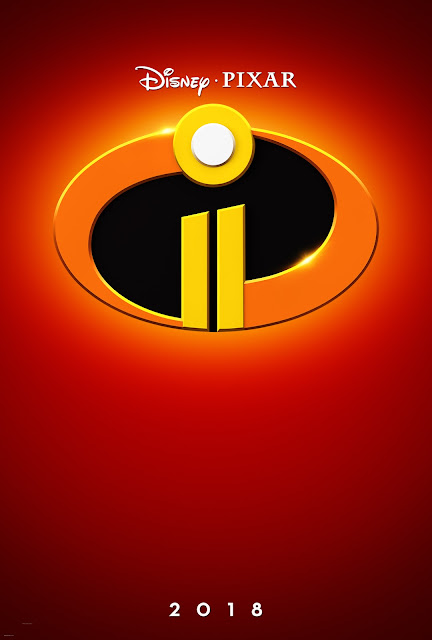 From the Marvel Cinematic Universe comes a new chapter featuring heroes with the astonishing ability to shrink: “Ant-Man and The Wasp.”  In the aftermath of “Captain America:  Civil War,” Scott Lang (Rudd) grapples with the consequences of his choices as both a Super Hero and a father.  As he struggles to rebalance his home life with his responsibilities as Ant-Man, he’s confronted by Hope van Dyne (Lilly) and Dr. Hank Pym (Douglas) with an urgent new mission. Scott must once again put on the suit and learn to fight alongside The Wasp as the team works together to uncover secrets from their past.

August 3, 2018 – DISNEY’S CHRISTOPHER ROBIN (Walt Disney Studios)
In the heartwarming live action adventure “Disney’s Christopher Robin,” the young boy who loved embarking on adventures in the Hundred Acre Wood with a band of spirited and loveable stuffed animals, has grown up and lost his way. Now it’s up to his childhood friends to venture into our world and help Christopher Robin remember the loving and playful boy who is still inside. 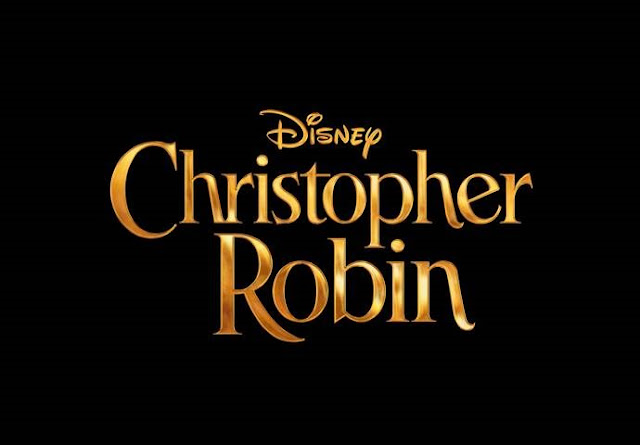 All Clara (Mackenzie Foy) wants is a key – a one-of-a-kind key that will unlock a box that holds a priceless gift. A golden thread, presented to her at godfather Drosselmeyer’s (Morgan Freeman) annual holiday party, leads her to the coveted key—which promptly disappears into a strange and mysterious parallel world. It’s there that Clara encounters a soldier named Phillip (Jayden Fowora-Knight), a gang of mice and the regents who preside over three Realms: Land of Snowflakes, Land of Flowers and Land of Sweets. Clara and Phillip must brave the ominous Fourth Realm, home to the tyrant Mother Ginger (Helen Mirren), to retrieve Clara’s key and hopefully return harmony to the unstable world. Starring Keira Knightley as the Sugar Plum Fairy, Disney’s new holiday feature film “The Nutcracker and the Four Realms” is directed by Lasse Hallström and inspired by E.T.A. Hoffmann’s classic tale.

“The Nutcracker and the Four Realms” releases in U.S. theatres on November 2, 2018. 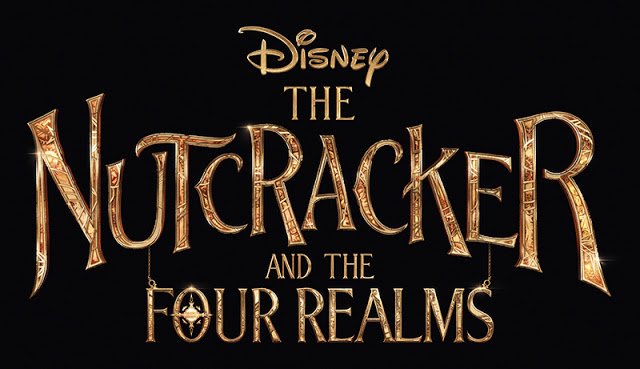 “Ralph Breaks the Internet: Wreck-It Ralph 2” leaves Litwak’s video arcade behind, venturing into the uncharted, expansive and thrilling world of the internet—which may or may not survive Ralph’s wrecking. Video game bad guy Ralph (voice of John C. Reilly) and fellow misfit Vanellope von Schweetz (voice of Sarah Silverman) must risk it all by traveling to the world wide web in search of a replacement part to save Vanellope’s video game, Sugar Rush. In way over their heads, Ralph and Vanellope rely on the citizens of the internet—the netizens—to help navigate their way, including a webite entrepreneur named Yesss (voice of Taraji P. Henson), who is the head algorithm and the heart and soul of trend-making site “BuzzzTube.” Directed by Rich Moore (“Zootopia,” “Wreck-It Ralph”) and Phil Johnston (co-writer “Wreck-It Ralph,” “Cedar Rapids,” co-writer “Zootopia,”), and produced by Clark Spencer (“Zootopia,” “Wreck-It Ralph,” “Bolt”), “Ralph Breaks the Internet: Wreck-Ralph 2” hits theaters on Nov. 21, 2018. 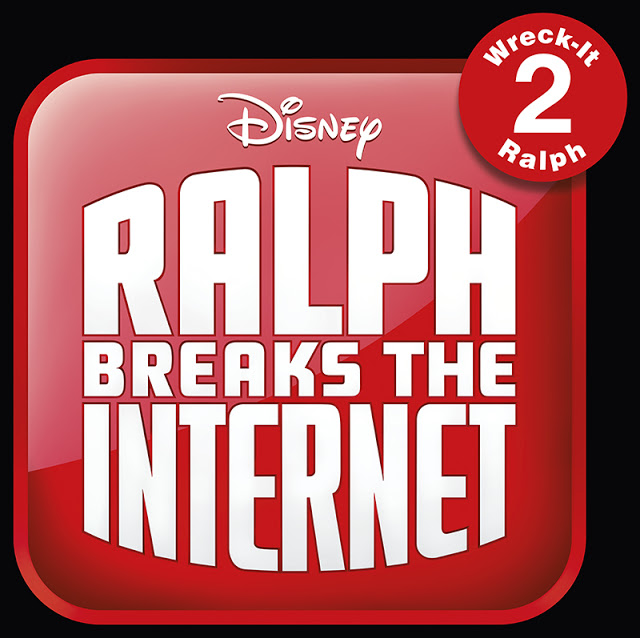 In Disney’s “Mary Poppins Returns,” an all-new sequel with a fresh sensibility that celebrates the spirit of the original, Mary Poppins is back to help the next generation of the Banks family find the joy and wonder missing in their lives. Emily Blunt (“The Girl on the Train,” “Into the Woods”) stars as the practically-perfect nanny with unique magical skills who can turn any task into an unforgettable, fantastic adventure and Lin-Manuel Miranda (“Hamilton,” “Moana”) plays her friend Jack, an optimistic street lamplighter who helps bring light—and life—to the streets of London. “Mary Poppins Returns” is directed by Rob Marshall (“Into the Woods,” “Chicago”). The screenplay is by David Magee (“Life of Pi”) and the screen story is by Magee & Marshall & John DeLuca (“Into the Woods”) based upon The Mary Poppins Stories by PL Travers. The producers are Marshall, DeLuca and Marc Platt (“La La Land”) with Callum McDougall serving as executive producer and the music is by Marc Shaiman (“Hairspray”) with songs by Shaiman and Scott Wittman (“Hairspray”). The film also stars Ben Whishaw (“Spectre”) as Michael Banks; Emily Mortimer (“Hugo”) as Jane Banks; Julie Walters (“Harry Potter” films) as the Banks’ housekeeper Ellen; with Colin Firth (“The King’s Speech”) as Fidelity Fiduciary Bank’s William Weatherall Wilkins; and Meryl Streep (“Florence Foster Jenkins”) as Mary’s eccentric cousin, Topsy and introduces three new Banks’ children played by Pixie Davies, Nathanael Saleh and newcomer Joel Dawson. Angela Lansbury appears as the Balloon Lady, a treasured character from the PL Travers books and Dick Van Dyke is Mr. Dawes Jr., the retired chairman of the bank now run by Firth’s character.

PL Travers first introduced the world to the no-nonsense nanny in her 1934 children’s book “Mary Poppins.” However, the subsequent adventures of Mary Poppins remained only on the pages of the seven other PL Travers’ books…until now. “Mary Poppins Returns” is drawn from the wealth of material in these additional books. The film takes place in 1930s Depression-era London 24 years after the original film was set. Michael Banks works for the same financial institution that employed his father and still lives at 17 Cherry Tree Lane with his three children, Annabel, John and Georgie and their housekeeper Ellen. Carrying on in her mother’s tradition, Jane Banks campaigns for workers’ rights and provides a helping hand to Michael’s family. When the family suffers a personal loss, Mary Poppins magically re-enters their lives and with Jack’s help, brings joy and wonder back into their home. 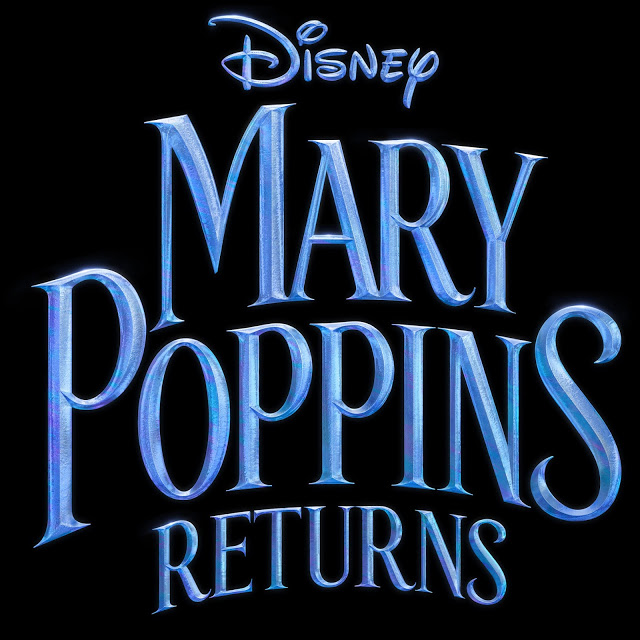