My daughter loves anything My little pony so when My Little Pony Equestria Girls came out I was super excited to review it!!

This Dvd is right up her alley she is very into the singing right now and into the my little pony so when she sees this on Christmas morning she is going to be so excited. Since this is for her as a surprise I had to take a peek at it and I can tell you this movie is super cute and so girly she is going to love it. And they look like little barbies. It's about they form a band and compete to win the battle at there high school . 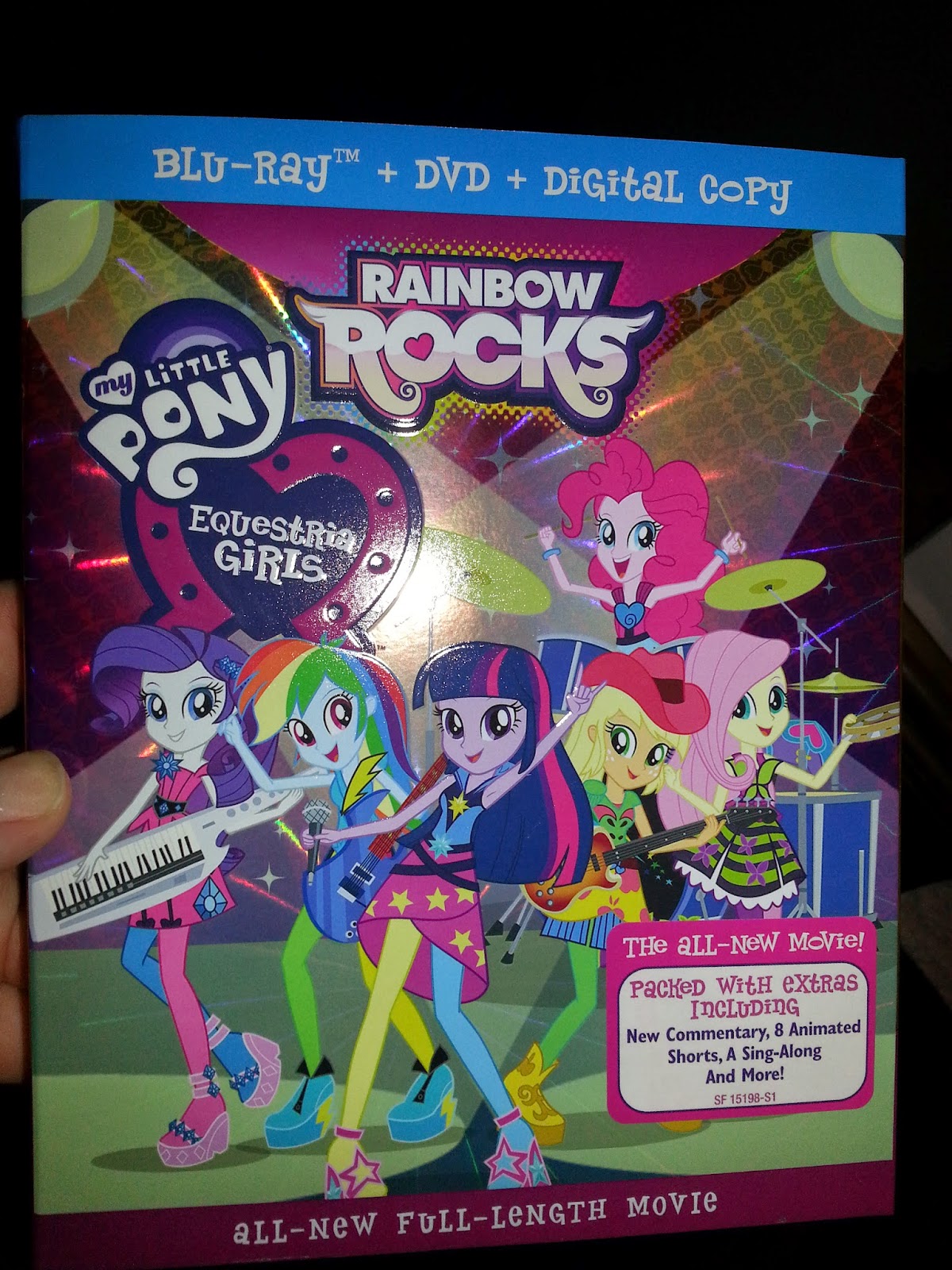 THE NEW FULL-LENGTH FILM
MY LITTLE PONY EQUESTRIA GIRLS: RAINBOW ROCKS
TO BE RELEASED ON BLU-RAY AND DVD
OCTOBER 28, 2014

“Rainbow Rocks does, in fact, rock.” – The Village Voice

“a candy-colored fantasy that uses tween-friendly comedy and tunes to teach lessons
in friendship and collaboration.” - The Hollywood Reporter

Los Angeles, CA – There’s a brand new full-length film in the ever-popular My Little Pony canon. Following a theatrical run in the fall of 2014, where the film opened with enthusiastic reviews to packed crowds in over 400 theaters, My Little Pony Equestria Girls: Rainbow Rocks will be released October 28 in the U.S. and Canada from Shout! Factory Kids, in collaboration with Hasbro Studios, as a single-disc DVD, and in a Blu-ray/DVD/Digital Copy combo. Bonus features include an Audio Commentary, 8 Prequel Shorts and Sing-Alongs.

In My Little Pony Equestria Girls, released in fall 2013, Twilight Sparkle’s crown was stolen from the Crystal Empire, and she pursued the thief, Sunset Shimmer, into an alternate world where she finds herself turned into…a teenage girl! To regain her crown and return to Equestria, Twilight had to learn how to fit into this strange, new world and defeat Sunset Shimmer in a competition to become crowned Princess of the Fall Formal at Canterlot High.

Now, the girls of Canterlot High are back, and this time they’re rocking guitars! In My Little Pony Equestria Girls: Rainbow Rocks, Canterlot High (CHS) is hosting a musical showcase, and Rainbow Dash, Applejack, Pinkie Pie, Rarity, and Fluttershy are going to be performing with their new band, The Rainbooms. But when The Dazzlings, a new girl group, arrive at CHS and convince everyone to turn the friendly showcase into a Battle of the Bands, tensions mount between the competing musical acts. A now-reformed Sunset Shimmer realizes that The Dazzlings may not be ordinary girls and are after something far more sinister than just being named Best Band at Canterlot High. The Rainbooms call on Princess Twilight to restore harmony to their world to help them perform a musical counter-spell so that they can win a battle that now determines the fate of the entire school. 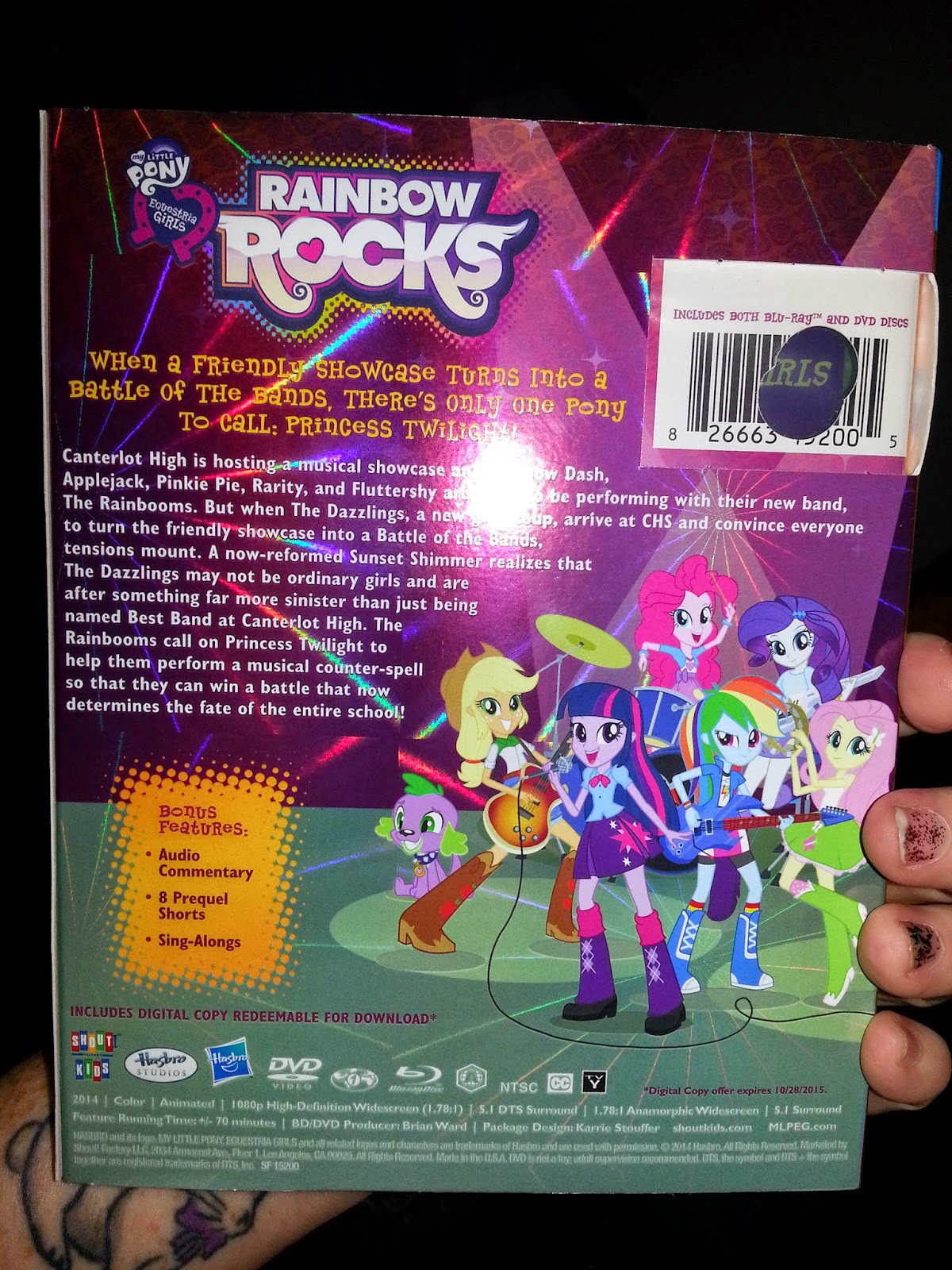 About Hasbro Studios:
Hasbro Studios is responsible for entertainment brand-driven storytelling for Hasbro across television, film, commercial productions and short-form content. It develops, produces and distributes TV shows based on Hasbro's world class brands, including TRANSFORMERS, MY LITTLE PONY, LITTLEST PET SHOP and FAMILY GAME NIGHT. Many of these shows air on Discovery Family Channel and on networks in more than 180 territories globally.  Since its formation in 2009, the studio has received seven Daytime Emmy wins.  On the film side, the studio has developed and produced a number of features based on Hasbro's brands.  Upcoming films planned for release include Ouija (Universal), CANDY LAND (Sony), G.I. JOE 3 (Paramount), JEM AND THE HOLOGRAMS (Universal) and MAGIC: THE GATHERING (21st Century Fox).

Disclaimer: I was sent products for free to review for my honest opinion. These products are from a PR agency or a company. Regardless, I only recommend products or services I use personally and believe will be good for my readers. Your opinions may vary from my opinions. Please allow 8 weeks to receive product. For Giveaway items.
on November 04, 2014