Announcement I Studio Ghibli: Spirited Away & The Cat Returns on Blu-ray 6/16

Disney presents two beloved films from the acclaimed Studio Ghibli, Oscar - Winning Masterpiece Spirited Away and the enchanting fantasy adventure The Cat Returns, will be available for the first time on Blu-ray Combo Pack June 16th!

Spirited Away is a wondrous fantasy about a young girl, Chihiro, trapped in a strange new world of spirits. While The Cat Returns is about a schoolgirl, Haru (voiced by Anne Hathaway), bored by her ordinary routine, saves the life of an unusual cat and suddenly her world is transformed beyond anything she ever imagined. Both are magical animated adventures that will delight and inspire the whole family! 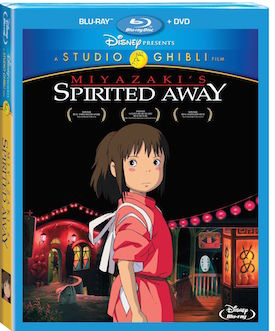 Experience these Magical Adventures Like Never Before
on Blu-ray Combo Pack June 16, 2015

Synopsis:                 From Hayao Miyazaki, one of the most celebrated filmmakers in the history of animated cinema, comes the Oscar®-winning triumph (2002, Best Animated Feature Film), filled with astonishing beauty and epic adventure, a dazzling masterpiece for the ages. “Spirited Away” is a wondrous fantasy about a young girl, Chihiro, trapped in a strange new world of spirits. When her parents undergo a mysterious transformation, she must call on the courage she never knew she had to free herself and return her family to the outside world.  An unforgettable story, brimming with creativity, “Spirited Away” will take you on a journey beyond your imagination. It’s a fantastic tale the whole family will want to experience over and over again on Disney Blu-ray! 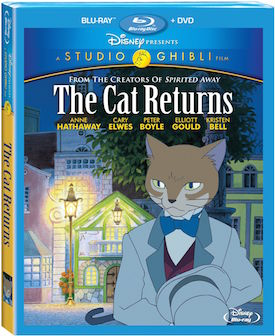 Synopsis:                    From the Studio that brought you “Spirited Away,” comes the visually stunning “The Cat Returns.” Haru, a schoolgirl bored by her ordinary routine, saves the life of an unusual cat, and suddenly her world is transformed beyond anything she ever imagined. To change her fate, she’ll need to learn to believe in herself and, in the process, she will learn to appreciate her everyday life. For the first time ever on Disney Blu-ray comes “The Cat Returns,” a magical animated adventure that will delight and inspire everyone.

ABOUT THE WALT DISNEY STUDIOS:
For over 90 years, The Walt Disney Studios has been the foundation on which The Walt Disney Company was built. Today, the Studio brings quality movies, music and stage plays to consumers throughout the world. Feature films are released under the following banners: Disney, including Walt Disney Animation Studios and Pixar Animation Studios; Disneynature; Marvel Studios; Lucasfilm; and Touchstone Pictures, the banner under which live-action films from DreamWorks Studios are distributed. The Disney Music Group encompasses the Walt Disney Records and Hollywood Records labels, as well as Disney Music Publishing. The Disney Theatrical Group produces and licenses live events, including Disney on Broadway, Disney On Ice and Disney Live!
# # #
on March 29, 2015