SHOUT! FACTORY, SCREENVISION AND NERD CORPS
TEAM UP TO BRING SLUGTERRA: RETURN OF THE ELEMENTALS
TO CINEMAS NATIONWIDE BEGINNING AUGUST 2, 2014

“We’re very excited that fans of this action-packed series will have a chance to see their favorite characters on the big screen. This theatrical opportunity underscores our long-term commitment to the Slugterra brand. We’re pleased to work closely with Nerd Corps and partner with Screenvision once again to bring this fun family movie to theatre audiences,” said Melissa Boag, Vice President of Kids & Family Entertainment, Shout! Factory.

“By partnering with Shout! Factory and Nerd Corps, we are pleased to expand our children’s programming offerings to our exhibitor partners, and bring the exciting world of Slugterra to the big screen,” said Darryl Schaffer, Executive Vice President, Operations and Exhibitor Relations for Screenvision.

“We’re very excited to be slugslinging on the big screen!” said Asaph Fipke, CEO of Nerd Corps and creator of the property. “The movie features new slugs, new characters, and some cool twists. It will be a great experience for fans and for anyone who’s new to Slugterra as well.”

Film Synopsis:
In Slugterra: Return of the Elementals, a new member joins the Shane Gang. Junjie is a master of the mysterious slugslinging art of Slug Fu. But even with the power of five slugslingers working together, the Shane Gang find themselves in over their heads as they race to protect the ancient Elemental Slugs from an evil alliance set on using them to destroy the 99 caverns.

About Slugterra Choose your ammo… Slug it out! Slugterra is an epic sci-fi comedy adventure set deep underground, where the ammo’s alive and only the quick survive! In this luminous, high-tech, underground world every cavern holds a new adventure, new battle and weird little slugs to be discovered. Eli Shane is determined to be the greatest slugslinging hero of them all. To do it, he’ll need to collect and train an army of little critters called slugs. When these magical creatures are fired at 100 MPH out of a high-powered blaster, they transform into powerful battle beasts! The adventure follows Eli and his team of friends as they explore the caverns, challenge rivals and each other to duels, upgrade their cool gear, and generally have a blast in this never-before imagined underground world. But there is a very real threat to Slugterra; Dr. Blakk is seeking to “ghoul” the slugs, transforming them into feral mindless weapons! No one has been able to stand up to Blakk’s powerful ghouls and army of henchmen…until now!

About Nerd Corps Entertainment Inc. Nerd Corps Entertainment is a privately held IP creation, development, production, and distribution company based out of Vancouver, Canada, with offices in Toronto, Canada. The company’s mandate is to produce stylistically innovative animated projects for television, online, and mobile based on a solid foundation of creative and exceptional storytelling. Working in a state-of-the-art studio with highly skilled artists and production staff, Nerd Corps’ expertise in creative development and execution covers all aspects of property generation and management, from development and production to distribution, marketing, interactive and licensing. The studio’s award-winning stable of productions includes original series Kate and Mim-Mim, Endangered Species, Slugterra, Storm Hawks, League of Super Evil and Rated A for Awesome, as well as Dragon Booster for Alliance Atlantis and Hot Wheels: Battle Force 5, Max Steel and Monster High for Mattel, Inc. Visit www.nerdcorps.com. 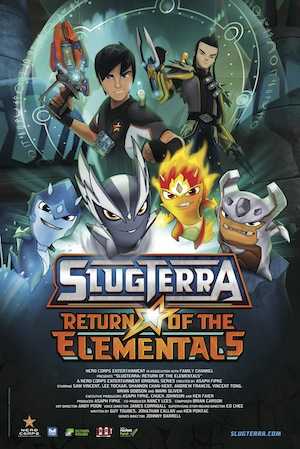