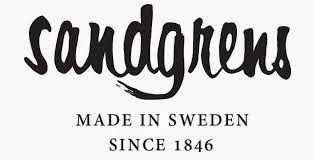 I have a great new shoe company to tell you about it's called Sandgrens and they sell a ton of different styles of  clogs and all of them are really cute. The style I was able to review was the Gladiator Gold Clogs these clogs are so cute I love them and they are so comfortable too. They are perfect to wear with my maxi skirts and my maxi dresses it gives just enough height so the dress doesn't drag the ground love them!!! 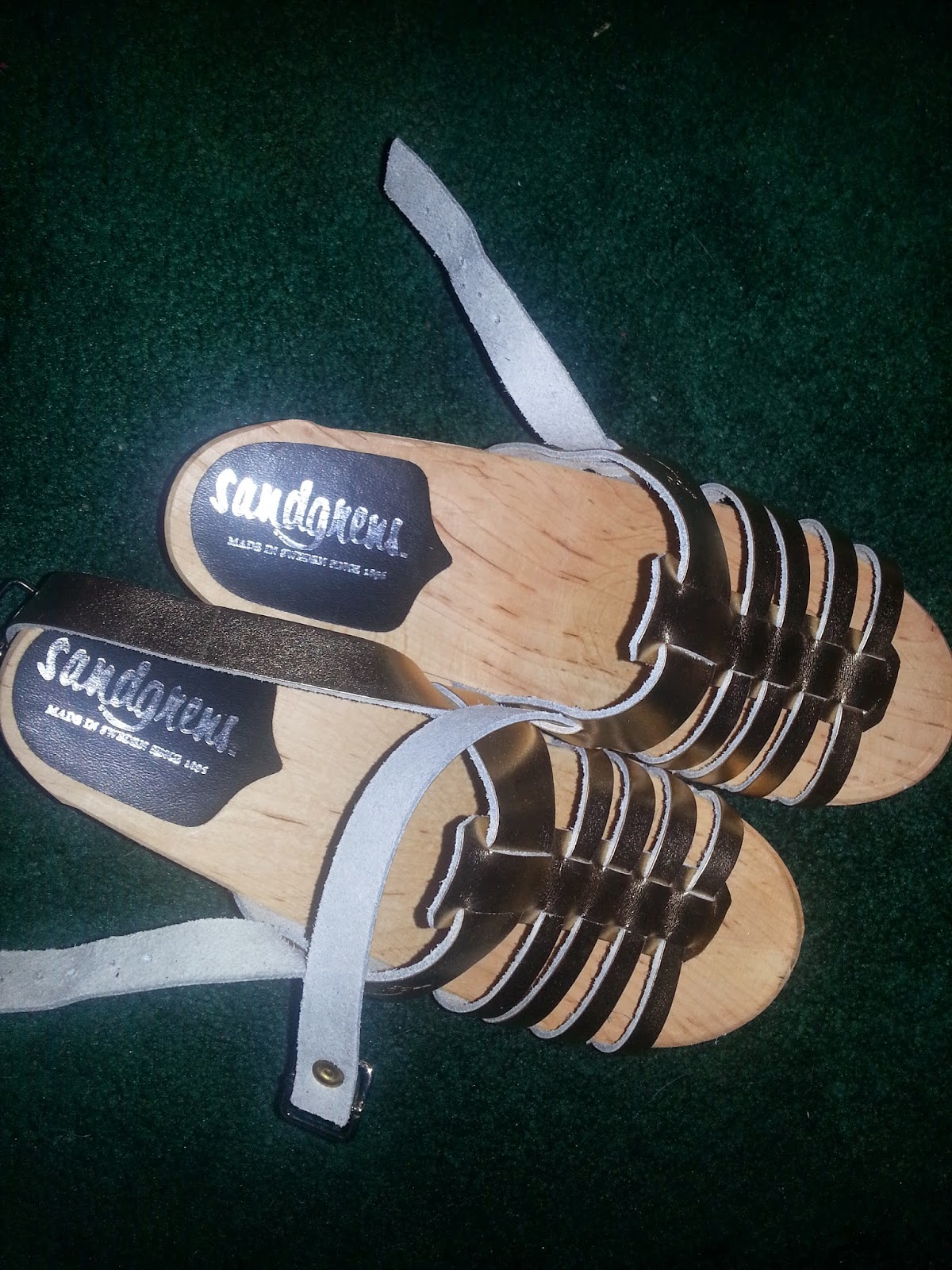 These are the shoes when you are looking at them from the top. 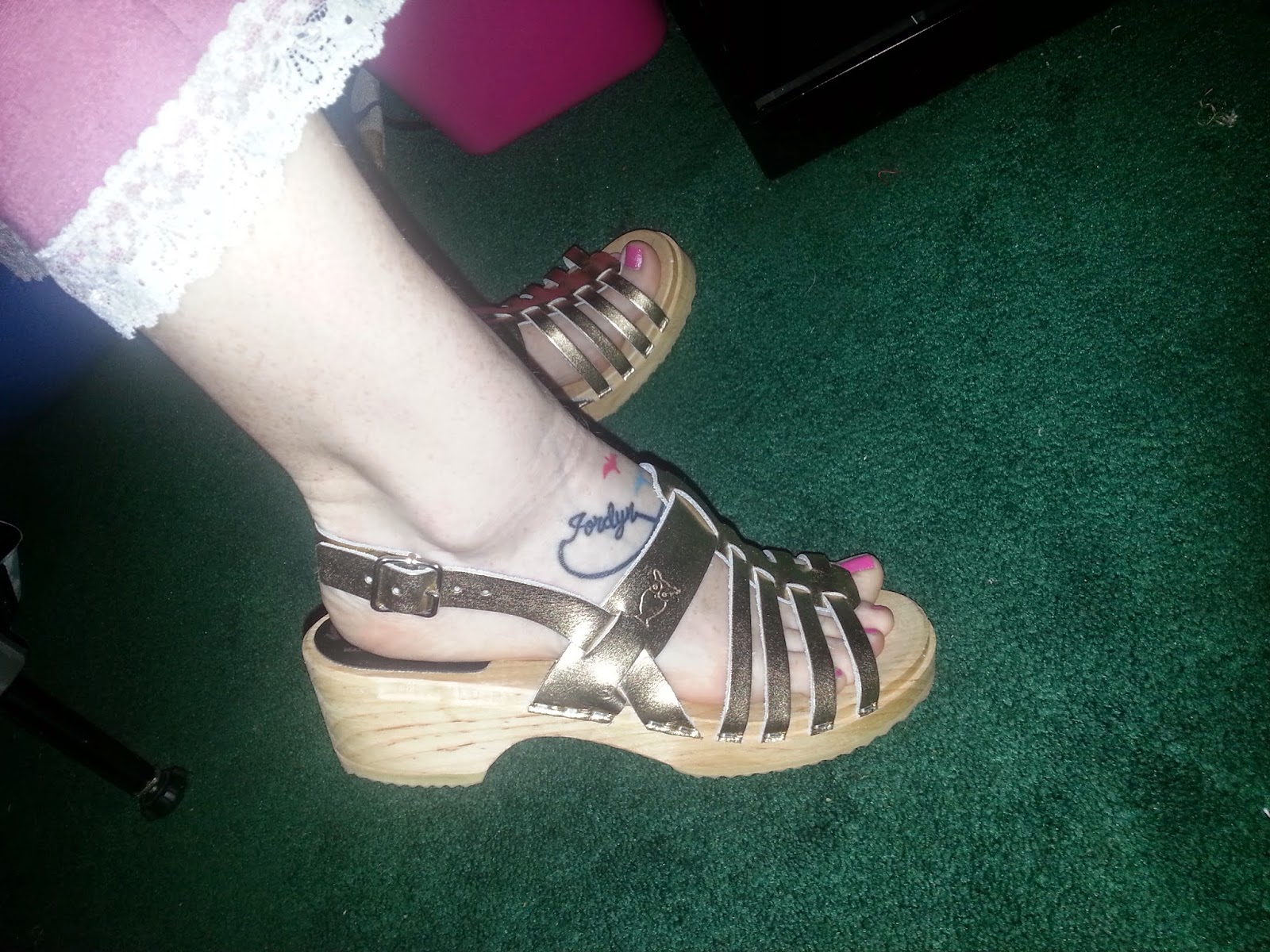 Here is what they look like on from the side. Please excuse my pajama pants ha ha. I choose the gold color because it can basically go with anything brown, black, Etc... really any color at all. 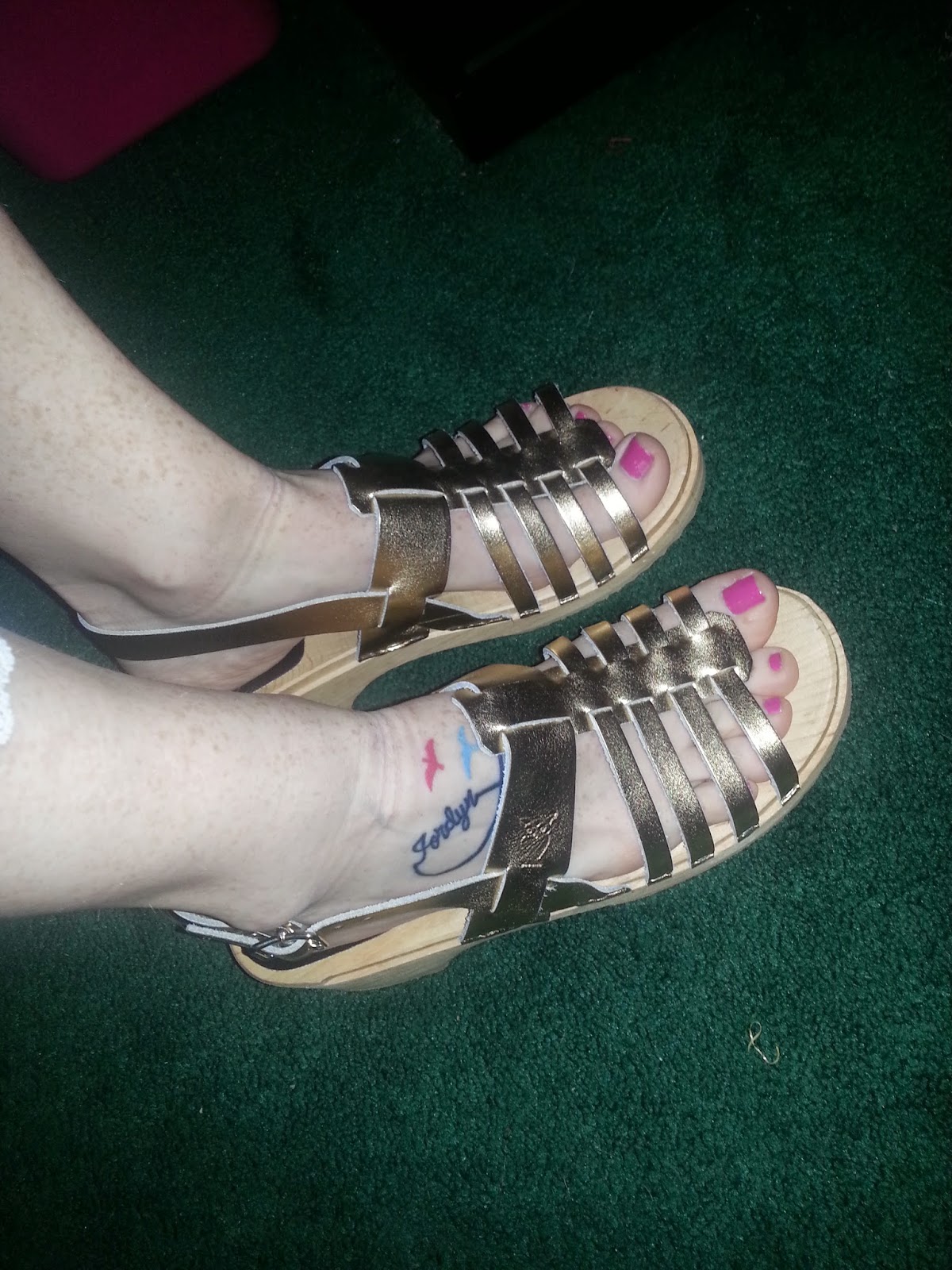 These lovable gladiator sandal clogs are both fashionable and easy to wear, making them a stylish addition to our Sandgrens collection. The gladiator clogs have a solid heel strap with a buckle for adjusting the instep in a comfortable way. This style comes on a low-heel Swedish Alder wood base and uses staples to fasten the traditional leather to the bottom. 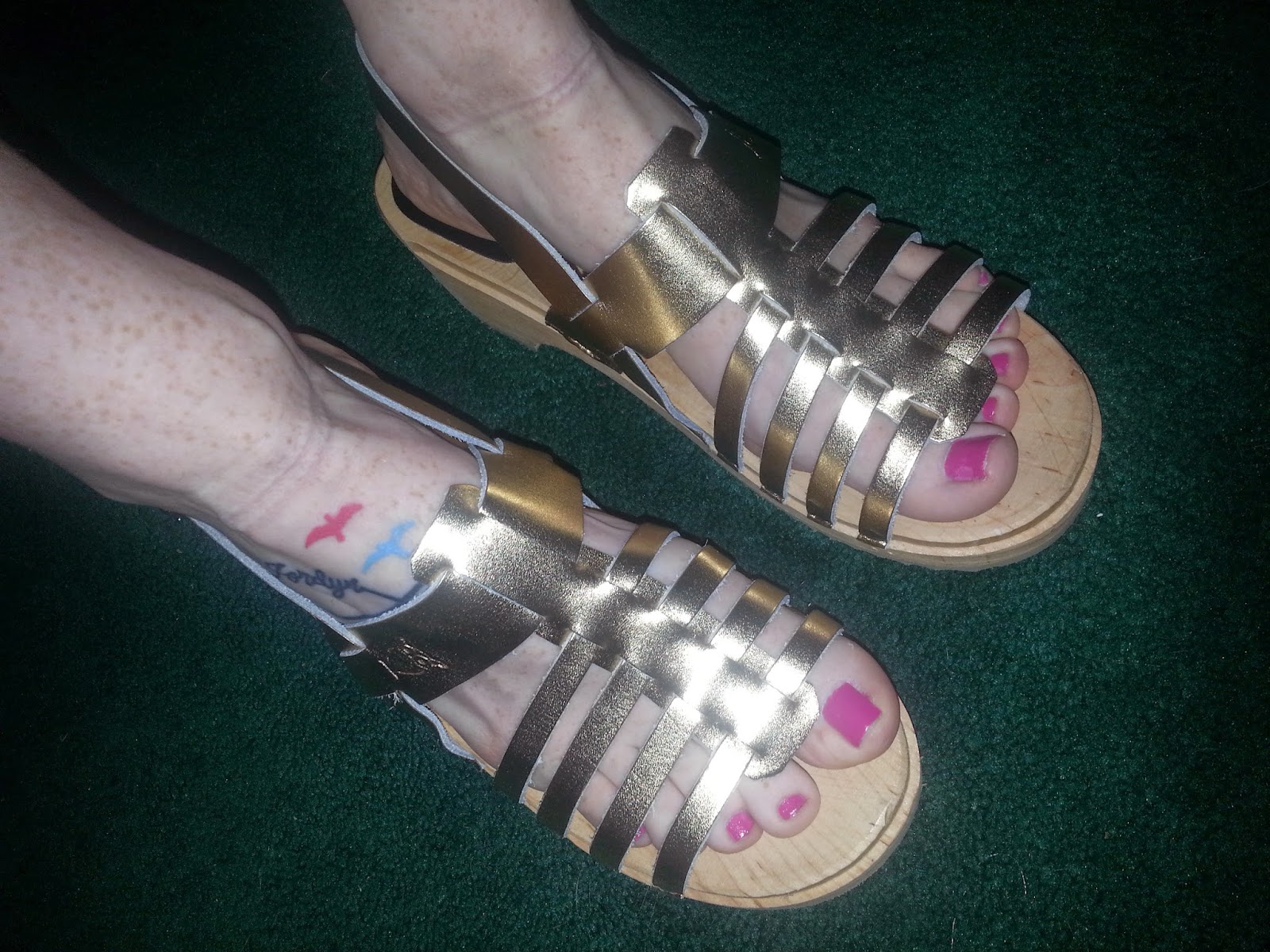 Historically, few countries have cherished clogs as much as Sweden, which is where Sandgrens Clogs was originally founded as a leather tannery in the mid 1800s.  Sandgrens is considered among the oldest clog - if not the oldest - brands in the world, and was once also the largest. During the 19th and early 20th century, the time of the great Swedish emigration to America, more than one million Swedes left their home country to seek better fortunes. They brought with them not only their traditions, but also their unwavering love for clogs.
In 1965, master clog maker Sven Carlsson decided to use his knowledge of the clog business to part ways with Sandgrens, where he had worked for the better part of two decades, to begin a new brand of clogs.  Sven gave the new brand a trendy image and a new name. Leaving was a difficult decision, but Sven was able to utilize much of the same innovation as he did during his time at Sandgrens.  Sven also brought his son Christer into what quickly became the family business. In all, Sven, his wife, Britta, and Christer all worked in various parts of the clog-making business.
During these prosperous times, Sven had so many American customers that he eventually decided to move production to the United States and start a new American company. The question then became how the two companies would avoid competing with each other. It was decided that Christer would focus primarily on the European market and Sven on the North American market. There was plenty of business for both companies, so Sven passed the family business to Christer and made his journey across the Atlantic as so many Swedes before him had.
It wasn’t until the 1970’s that the clog-craze had hit America. By then, American youth had an insatiable demand for those “fun wooden shoes.”   At our peek we at Sandgrens were making 1,000,000 pairs of clogs per year, by far the largest clog brand and clog maker in the world.
Both Sandgrens and the Swedish company Sven left to Christer (our current Clog Master) did very well throughout the 1970s and early 1980s, but matters would soon take a turn for the worse. During the early 1980s, the world demand for clogs saw a steep turnaround as they went out of fashion. As if this wasn’t enough, the world also suffered a very poor economic period, which caused nearly all large clog makers to stumble, if not fall altogether.
Sandgrens struggled through the recession and had finally to close its doors. Christer remembered what Sandgrens had meant to his father and himself while growing up and immediately recognized what an opportunity this was to bring Sandgrens – a legendary Swedish clog maker – back into the Swedish clog making family where it belonged. Christer soon bought all of Sandgrens’ old equipment, clog styles and the rights to sell their products with the Sandgrens name. Having the brand back under our roof once more was like coming full circle!
Today, we at Sandgrens are going back to our roots in restoring the brand to its former greatness. We may no longer be the biggest, but our clog masters are still using the same time-honored techniques in transforming the finest leather and wood into high-quality clogs for your whole family.
We encourage you to not just take our word for it – walk in the shoes of our forefathers and try out a pair of Sandgrens Clogs for yourself. You will see why those stubborn old Swedes refused to part with their clogs, even when they had an entire ocean standing in their way.