Home Again is available for Digital viewing on November 21st - just in time for a Thanksgiving movie night! 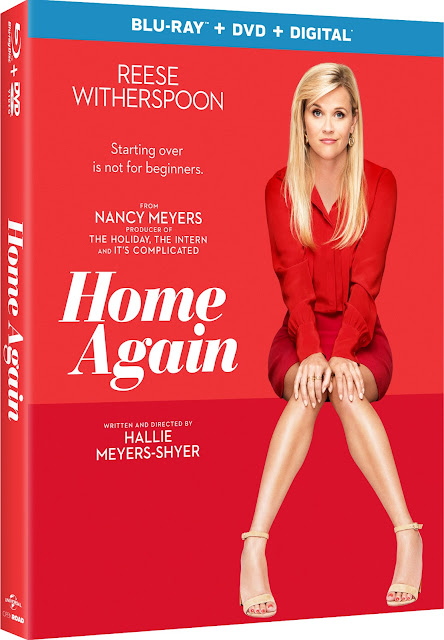 Academy Award®winner Reese Witherspoon(“Big Little Lies”)stars in Home Again, a modern romantic comedy about love, family, and new beginnings. Home Again arrives onDigital on November 21, 2017, and on Blu-rayTM, DVD, and On Demand on December 12, 2017, from Universal Pictures Home Entertainment.Smart and oozing with charm, the film takes viewers on a heart-warming journey of laughter, emotion, and self-discovery as Witherspoon navigates life as a newly single mother of two.The perfect holiday gift for romantic comedy fans of all ages, Home Again on Blu-rayTM,DVD and Digital features a bonus commentary with the director and the producer of the film, taking viewers even deeper into the heartfelt story.Produced byNancy Meyers, who brought us beloved filmsincludingSomething’s Gotta Give,The Holiday,andThe Intern,Home Again is filled with a talented ensemble cast including Michael Sheen (Midnight in Paris), Lake Bell (What Happens In Vegas), Nat Wolff (The Fault in Our Stars), Pico Alexander (A Most Violent Year), Jon Rudnitsky (“Saturday Night Live”) and Candice Bergen (Miss Congeniality). Alice (Witherspoon), a recently separated mother of  two, finds her life upended when three young, charismatic filmmakers move into her guest house. Alice’sunlikely new family and a budding romance comes to a crashing halt when her ex-husband shows up, suitcase in hand. A story of love, friendship, and the families we create, Home Again is a modern romantic comedy with one


very big life lesson: starting over is not for beginners!BONUS FEATUREON BLU-RAY™, DVD AND DIGITAL Feature Commentarywith writer/director Hallie Meyers-Shyer and producer Nancy MeyersHome Againwill be available on Blu-ray™combo pack which includes Blu-ray™, DVD and Digital. Blu-ray™unleashes the power of  your HDTV and is the best way to watch movies at home, featuring 6X the picture resolution of  DVD, exclusive extras and theater-quality surround sound. Digital lets  fans  watch  movies  anywhere  on  their  favorite  devices.  Users  can  instantly stream or download.The Movies Anywhere Digital Appsimplifies and enhances the digitalmoviecollection and  viewing  experience  by  allowing  consumers  to  access  their  favorite  digital  moviesin one place when purchased or redeemed through participating digital retailers. Consumers can  also  redeem  digital  copy  codesfound  in  eligible  Blu-ray TMand  DVD  disc  packages from    participating    studios    and    stream    or    download    them    through    Movies Anywhere.Movies Anywhere is available only in the United States.
Facebook: https://www.facebook.com/homeagainmovie/