Get ready for cuddly Disney Magic with Doc McStuffins and her pet friends in DOC MCSTUFFINS: TOY HOSPITAL on DVD October 18th! Filled with over 2 hours of new episodes & songs, and a FREE exclusive toysponder bracelet packed inside! Join Doc as she expands her practice from the backyard clinic to the magical new world of McStuffinsville, where she will carry on a family tradition by becoming Chief Resident of McStuffins Toy Hospital! 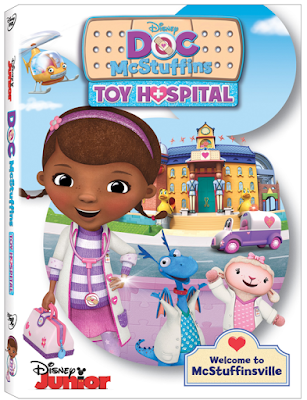 Includes over 2 Hours of New Adventures and New Songs,
Plus a FREE Exclusive Toysponder Bracelet!

Synopsis:                             Join Doc as she expands her practice from the backyard clinic to the magical new world of McStuffinsville, where she will carry on a family tradition by becoming Chief Resident of McStuffins Toy Hospital. After Grandma McStuffins shares the news that she too has the ability to bring toys to life, she transports Doc and her friends to McStuffinsville, a magical world made up entirely of toys.  There, Doc appoints Lambie in charge of the toy nursery, Stuffy on vet duty, Chilly as receptionist and Hallie as head nurse.

Also featured are four episodes highlighting the McStuffins' family experience as they encounter the joys of adoption after Mom and Dad McStuffins announce that they are adopting a baby. Storylines focus on a variety of emotions and situations young children can encounter when a new baby arrives in the family.
Cast:                                      Laya DeLeon Hayes as Doc McStuffins; Lara Jill Miller as Lambie; Robbie Rist as Stuffy; Loretta Devine as Hallie; Jess Harnell as Chilly; Andre Robinson as Donny McStuffins; Kimberly Brooks as Mom McStuffins; Gary Anthony Williams as Dad McStuffins; and Dawnn Lewis as Grandma McStuffins.
Executive Producer:         Chris Nee

ABOUT THE WALT DISNEY STUDIOS:
For over 90 years, The Walt Disney Studios has been the foundation on which The Walt Disney Company was built. Today, the Studio brings quality movies, music and stage plays to consumers throughout the world. Feature films are released under the following banners: Disney, including Walt Disney Animation Studios and Pixar Animation Studios; Disneynature; Marvel Studios; Lucasfilm; and Touchstone Pictures, the banner under which live-action films from DreamWorks Studios are distributed. The Disney Music Group encompasses the Walt Disney Records and Hollywood Records labels, as well as Disney Music Publishing. The Disney Theatrical Group produces and licenses live events, including Disney on Broadway, Disney On Ice and Disney Live!
# # #
© 2016 Disney
on July 29, 2016