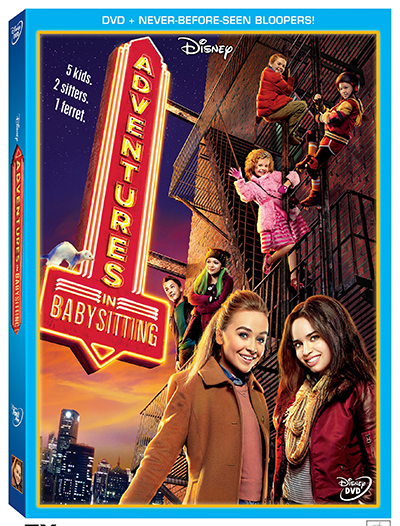 A 10-Minute Preview will be Available Friday, June 3 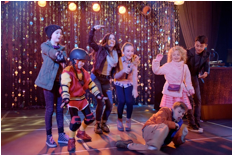 The "Adventures in Babysitting" premiere telecast is sponsored by Post Fruity Pebbles and Cocoa Pebbles. It will be followed by the premiere of Disney Channel's new comedy series "Bizaardvark."

In a heartfelt story that celebrates individuality, friendship and self-empowerment, the live-action adventure comedy made for kids, tweens and families, pays homage to the 1980s classic with familiar references and iconic scenes.

"Adventures in Babysitting," unfolds when Jenny Parker (Sabrina Carpenter) and Lola Perez (Sofia Carson), two teen girls with distinctly different personalities, each  interview for a coveted photography internship and accidently swap phones.  When the Anderson family calls Jenny's phone looking for a last-minute babysitter, audacious Lola, in need of some extra cash, picks up and nominates herself.  Meanwhile, dependable Jenny is already set to babysit the Cooper family for the evening. Unfortunately, Lola's first attempt at babysitting takes an unforeseen turn when one of the Anderson kids sneaks out to go to a concert. Jenny, determined to protect her reputation, and Lola with the remaining kids in tow, head out and have the adventure of a lifetime during one magical night in the big city.

"Adventures in Babysitting" is directed by John Schultz ("Judy Moody and the Not Bummer Summer," "Like Mike")and written by Tiffany Paulsen ("Nancy Drew"). The movie is executive-produced by Michelle Manning ("Teen Beach 2," "The Breakfast Club") and Chuck Minsky is the director of photography ("The Princess Diaries 2: Royal Engagement," "Mother's Day").

The "Adventures in Babysitting" multi-platform schedule in the U.S. is:

FRIDAY, MAY 20
[if !supportLists]·[endif]The digital single for "Wild Side," the movie's end credit song performed by Carpenter and Carson, will be available for purchase.  A lyric video for the song will also premiere on Disney Channel.

FRIDAY, JUNE 3
[if !supportLists]·[endif]An exclusive preview of the first 10 minutes of the movie will be available on the Disney Channel and Freeform Apps and via Disney Channel YouTube and Facebook.

FRIDAY, JUNE 17
[if !supportLists]·     [endif]Advance viewing of "Adventures in Babysitting" available on VOD and to verified users on the Disney Channel app for smartphones, tablets and connected TVs.

SATURDAY, JUNE 25
[if !supportLists]·     [endif]"Adventures in Babysitting" is available for purchase on iTunes, Amazon Instant Video and Google Play.

TUESDAY, JUNE 28
[if !supportLists]·     [endif]"Adventures in Babysitting" is available on DVD at retailers nationwide. The DVD includes exclusive bloopers and a complimentary magnetic photo frame.

About Disney Channel
Disney Channel is a 24-hour kid-driven, family-inclusive television network that taps into the world of kids and families through original series and movies. Currently available on basic cable in over 96 million U.S. homes and to millions of other viewers on Disney Channels around the world, Disney Channel is part of the Disney ABC Television Group.

*COPYRIGHT ©2016 Disney Enterprises, Inc. All photography is copyrighted material and is for editorial use only. Images are not to be archived, altered, duplicated, resold, retransmitted or used for any other purposes without written permission of Disney Channel. Images are distributed to the press in order to publicize current programming. Any other usage must be licensed. Photos posted for Web use must be at the low resolution of 72dpi, no larger than 2x3 in size.