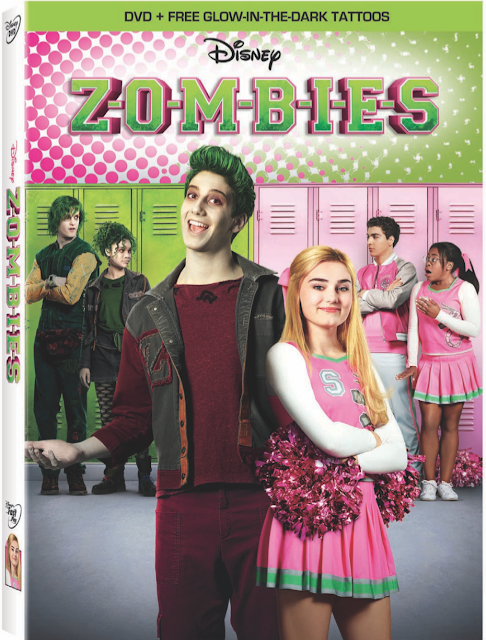 Disney Channel’s newest original movie is filled with music, dances, and high school woes - plus zombies! Set fifty years after a zombie apocalypse, zombies are finally allowed to enroll in Seabrook High School. The charming zombie Zed, who is determined to play football, meets freshman Addison who dreams of being a cheerleader -- the ultimate form of status in the community. Zed and Addison work together to show Seabrook what they can achieve when they embrace their differences and celebrate what makes them a community. It’s a no-brainer, grab ZOMBIES on Disney DVD on April 24th!

ZOMBIES
At this School, it takes GUTS to be Yourself!

Synopsis:                             Disney's "ZOMBIES" is a music- and dance-filled story set in the fictitious world of Seabrook, a cookie-cutter community brimming with perky conformity 50 years after a zombie apocalypse. Today, the zombies pose no threat, but are required to live in Zombietown, an isolated, rundown community infused with their unique creative spirit. When zombies are finally allowed to enroll in Seabrook High School, the charming, charismatic zombie Zed, who is determined to play football, meets freshman Addison who dreams of being a cheerleader -- the ultimate form of status in Seabrook. Addison takes a lot of flak for befriending Zed and his zombie friends, but comes to learn that zombies and cheerleaders aren't so different after all. Zed and Addison work together to show Seabrook what they can achieve when they embrace their differences and celebrate what makes them a community.

Co-Producers/
Writers:                David Light and Joseph Raso
Bonus Material:                 Zombie Blooper Reel (DVD Exclusive)  - Laugh out loud at the Cast of ZOMBIES in this compilation of the funniest bloopers and outtakes from the making of the film.  TRT:  3:53
The Zombie Survival Guide To High School (DVD Exclusive) - This piece uses a visual motif of a Zombie Survival Guide, with styled infographics and hosted by the talent.  We go down the list of some of the most important survival tips for Zombies and humans on how to get along and make the best of high school.  TRT:  2:24
Dance Tutorial – Join Meg Donnelly (Addison), Kylee Russell (Eliza) and ZOMBIES Choreographer, Christopher Scott, as they show you how to dance along to the ‘BAMM” Music Video. TRT:  3:38
Deleted Scene #1 (DVD Exclusive)  - It’s a Cheer-tastrope  TRT:  :57
Deleted Scene #2 (DVD Exclusive) – New Jacket, New Name TRT:  1:09
Audition Tapes (DVD Exclusive)
Milo Manheim Audition TRT: 1:16
Meg Donnelly Audition TRT :57
Music Video – “BAMM” TRT 3:39
Lyric Video – “BAMM”  TRT 3:23
Trailer #1  TRT:  2:20
Trailer #2   TRT 1:50