Fun-Filled Island Adventure Arrives on Blu-ray™, DVD, and On Demand November 29 from Lionsgate

Available on Digital HD on November 22 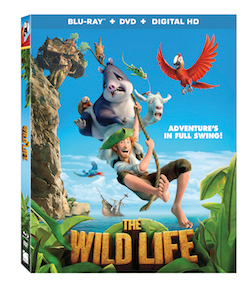 SANTA MONICA, CA (October 10, 2016) – From the producers that brought audiences Shaun the Sheep Movie, Paddington and A Turtle’s Tale: Sammy’s Adventures, The Wild Life arrives on Blu-ray Combo Pack (plus DVD and Digital HD), DVD (plus Digital), and On Demand November 29 from nWave Pictures, Studiocanal and Summit Entertainment, a Lionsgate company. The Wild Life will also be available on Digital HD on November 22. The perfect film for families to watch together over the holidays, this wildly adventurous animated comedy begins as Mak the parrot and his friends discover a mysterious visitor washed up on their island’s shore.

Embark on a tropical misadventure with a group of quirky animals and their human castaway, Robinson Crusoe. When savage cats invade their paradise, Robinson and the island’s animals team up to defend themselves and their home in this fun-filled movie.

The Wild Life home entertainment special features include a behind-the-scenes featurette looking at the making of the film, an introduction to the characters, a Wild Life music video, and a short “Tips for Your Trip” featurette for viewers to successfully prepare for  their next trip to the islands. The Wild Life will be available on Blu-ray Combo Pack and DVD for the suggested retail price of $34.99 and $29.95, respectively.

ABOUT LIONSGATE
Lionsgate is a premier next generation global content leader with a diversified presence in motion picture production and distribution, television programming and syndication, home entertainment, international distribution and sales, branded channel platforms, interactive ventures and games, and location-based entertainment.  The Company has nearly 80 television shows on 40 different networks spanning its primetime production, distribution and syndication businesses.  These include the ground-breaking hit series Orange is the New Black, the fan favorite series Nashville, the syndication success The Wendy Williams Show, the hit drama series The Royals, the Golden Globe-nominated dramedy Casual and the breakout success Greenleaf.

Lionsgate's home entertainment business is an industry leader in box office-to-DVD and box office-to-VOD revenue conversion rates.  Lionsgate handles a prestigious and prolific library of approximately 16,000 motion picture and television titles that is an important source of recurring revenue and serves as a foundation for the growth of the Company's core businesses. The Lionsgate and Summit brands remain synonymous with original, daring, quality entertainment in markets around the world. www.lionsgate.com
on October 10, 2016