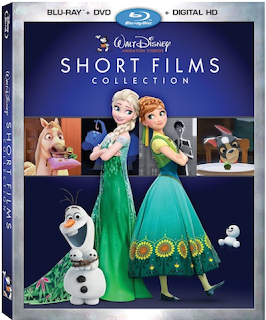 About:                                         From Walt Disney Animation Studios comes an extraordinary new collection of award-winning and beloved short films featuring Disney's Frozen Fever, starring Anna, Elsa, Olaf, Sven and Kristoff, and the Oscar®-nominated Lorenzo (Best Animated Short, 2004).  The Short Films Collection includes contemporary shorts starring classic characters, such as the groundbreaking 2013 Mickey Mouse cartoon, Get A Horse! And the holiday treat Prep & Landing: Operation: Secret Santa, as well as celebrated Oscar winners Paperman (2012) and Feast (2014). Enjoy them together for the first time in this must-own collection with all-new extras including an inside look at the Disney Animation shorts, featuring introductions and interviews with the acclaimed filmmakers themselves.

Bonus Features:                   FILMMAKER INTROS - The filmmakers behind the shorts share their journeys and introduce their films.

@DISNEYANIMATION: A SHORT STORY ON SHORTS - Continuing a legacy started in the earliest days of the Studio by Walt Disney, the Shorts Program is thriving today at the Animation Studios that bears his name, producing award-winning shorts that tell new stories and experiment with artistic and technical innovations. This latest chapter in the @DisneyAnimation series gives us an inside look at the process of developing and producing a short. Hosted by actor/comedian T.J. Miller (voice of “Fred,” Big Hero 6), we will meet a few of the artists and filmmakers who make the shorts, and learn why they are such an important part of the fabric of Walt Disney Animation Studios. Round Table Panelists include Lauren MacMullan (Get A Horse!), Mike Gabriel (Lorenzo), Kristina Reed (Feast, Paperman), Stevie Wermers-Skelton and Kevin Deters (the team behind The Ballad of Nessie, Prep & Landing: Operation Secret Santa, How to Hook Up Your Home Theater). 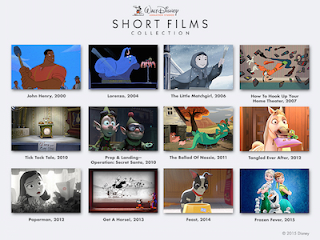 ABOUT WALT DISNEY ANIMATION STUDIOS:
Combining masterful artistry and storytelling with groundbreaking technology, Walt Disney Animation Studios is a filmmaker-driven animation studio responsible for creating some of the most beloved films ever made. Located in Burbank, WDAS continues to build on its rich legacy of innovation and creativity, stretching from the first fully-animated feature film, 1937's Snow White and the Seven Dwarfs, to 2013's Academy Award®-winning Frozen, the biggest animated film of all time. Among the studio's timeless creations are Cinderella, Sleeping Beauty, The Jungle Book, Beauty and the Beast, The Lion King, Tangled and the Oscar®-winning Big Hero 6.

ABOUT THE WALT DISNEY STUDIOS:
For over 90 years, The Walt Disney Studios has been the foundation on which The Walt Disney Company was built. Today, the Studio brings quality movies, music and stage plays to consumers throughout the world. Feature films are released under the following banners: Disney, including Walt Disney Animation Studios and Pixar Animation Studios; Disneynature; Marvel Studios; Lucasfilm; and Touchstone Pictures, the banner under which live-action films from DreamWorks Studios are distributed. The Disney Music Group encompasses the Walt Disney Records and Hollywood Records labels, as well as Disney Music Publishing. The Disney Theatrical Group produces and licenses live events, including Disney on Broadway, Disney On Ice and Disney Live!
on June 05, 2015