Announcement I Star Wars Rebels: Complete Season One on Blu-ray 9/1


A spark of rebellion ignites the galaxy in Star Wars Rebels: Complete Season One on Blu-ray and DVD September 1st! The release is packed with 15 episodes plus never-before-seen bonus material and cast/crew interviews revealing the magic behind the making of the hit series. 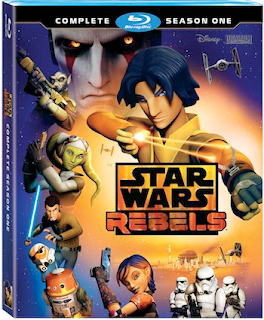 A Spark of Rebellion Ignites the Galaxy in
Star Wars Rebels: Complete Season One!

About Lucasfilm Ltd.
Lucasfilm Ltd., a wholly owned subsidiary of The Walt Disney Company, is a global leader in film, television and digital entertainment production. In addition to its motion-picture and television production, the company's activities include visual effects and audio post-production, cutting-edge digital animation, interactive entertainment software, and the management of the global merchandising activities for its entertainment properties including the legendary STAR WARS and INDIANA JONES franchises. Lucasfilm Ltd. is headquartered in northern California.
Lucasfilm, the Lucasfilm logo, STAR WARS and related properties are trademarks and/or copyrights, in the United States and other countries, of Lucasfilm Ltd. and/or its affiliates. STAR WARS © & TM 2015 Lucasfilm Ltd. All Rights Reserved. All other trademarks and trade names are properties of their respective owners.
# # #
on June 26, 2015