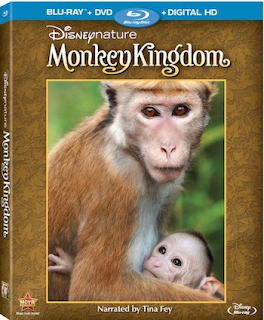 From Disneynature, the studio that brought you Chimpanzee and Bears, comes MONKEY KINGDOM, a spectacular tale set among ancient ruins in the storied jungles of South Asia. Maya, a clever and resourceful monkey, and her family will make you laugh and warm your heart as she realizes her dreams for her son’s future. Narrated by Tina Fey, own this breathtaking feature film on Digital HD, Disney Movies Anywhere (DMA) & Blu-ray Combo Pack on September 15. Enjoy this must-own film and Disneynature will donate a portion of first-week sales to Conservation International to help protect endangered species in their natural habitats.

From the Studio behind CHIMPANZEE and BEARS, comes…

Synopsis:                                 From Disneynature, the studio that brought you Chimpanzee and Bears, comes MONKEY KINGDOM, a spectacular tale set among ancient ruins in the storied jungles of South Asia. Maya, a clever and resourceful monkey, finds her world forever changed when she welcomes her son Kip into her colorful extended family. As Maya strives to keep Kip safe through unexpected and sometimes perilous adventures, amazing footage captures all the magic and surprises of their magnificent world. Maya and her family will make you laugh and warm your heart as she realizes her dreams for her son’s future.

Conservation Program: For every Digital and Blu-ray Combo Pack sold during first-week sales, Disneynature will make a donation to Conservation International in your honor to help protect endangered species in their natural habitat, supporting conservation project across Indonesia, Cambodia, and Sri Lanka.

ABOUT DISNEYNATURE:
Disneynature was launched in April 2008. Its mission is to bring the world’s top nature filmmakers together to share a wide variety of wildlife stories on the big screen in order to engage, inspire and educate theatrical audiences everywhere. Walt Disney was a pioneer in wildlife filmmaking, producing 13 True-Life Adventure motion pictures between 1948 and 1960, which earned eight Academy Awards®. The first five Disneynature films, “Earth,” “Oceans,” “African Cats,” “Chimpanzee,” and “Bears” are five of the top six highest overall grossing feature-length nature films to date, with “Chimpanzee” garnering a record-breaking opening weekend for the genre. Disneynature’s commitment to conservation is a key pillar of the label and the films empower the audience to help make a difference. Through donations tied to opening-week attendance and first week of in-home sales for all five films, Disneynature, through the Disney Worldwide Conservation Fund, has planted three million trees in Brazil’s Atlantic Forest, established 40,000 acres of marine protected area in The Bahamas, protected 65,000 acres of savanna in Kenya, protected nearly 130,000 acres of wild chimpanzee habitat, cared for chimpanzees, educated 60,000 school children about chimpanzee conservation and funded research and restoration grants in U.S. National Parks, supporting conservation projects across 400,00 acres of U.S. National Parkland and protecting endangered species. For more information about Disneynature, like us on Facebook: facebook.com/Disneynature and follow us on Twitter: twitter.com/Disneynature.

Since 1987, Conservation International has been working to improve human well-being through the care of nature. With the guiding principle that nature doesn't need people, but people need nature for food, water, health and livelihoods—CI works with more than 1,000 partners around the world to ensure a healthy, more prosperous planet that supports the well-being of people. Learn more about CI and the "Nature Is Speaking " campaign, and follow CI's work on Facebook, Twitter and YouTube .
on June 12, 2015