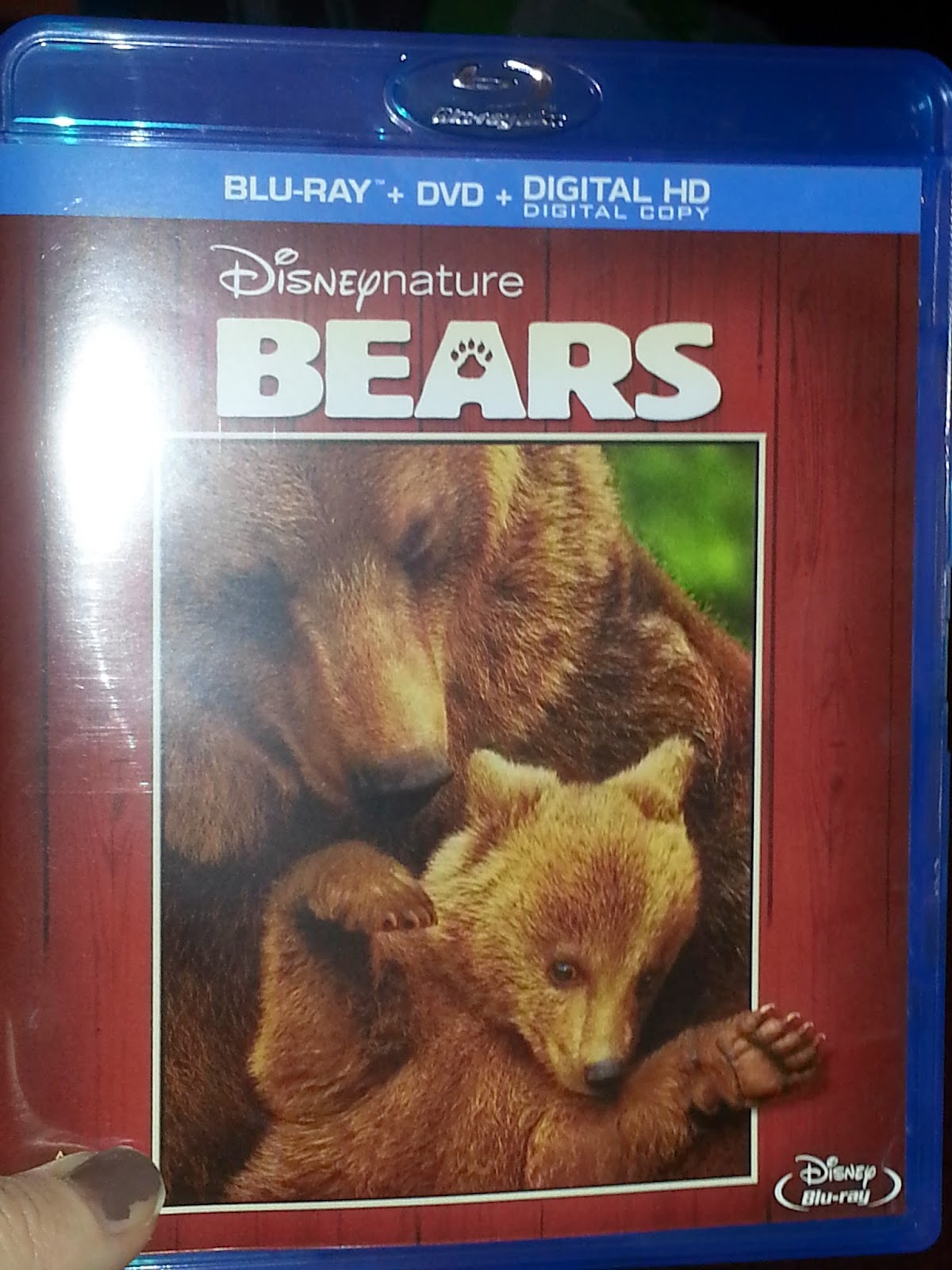 The kid's absolutely loved this movie Disneynature Bears. I found it pretty interesting too. It tells you about bears and how they live and just their nature. I really enjoyed this video too. It was interesting seeing the bears eat the salmon and catching the fish for dinner and them fighting over the fish.

The kid's have been requesting to watch this one over and over. I am glad they like it so much and I enjoy how it teaches them about nature. 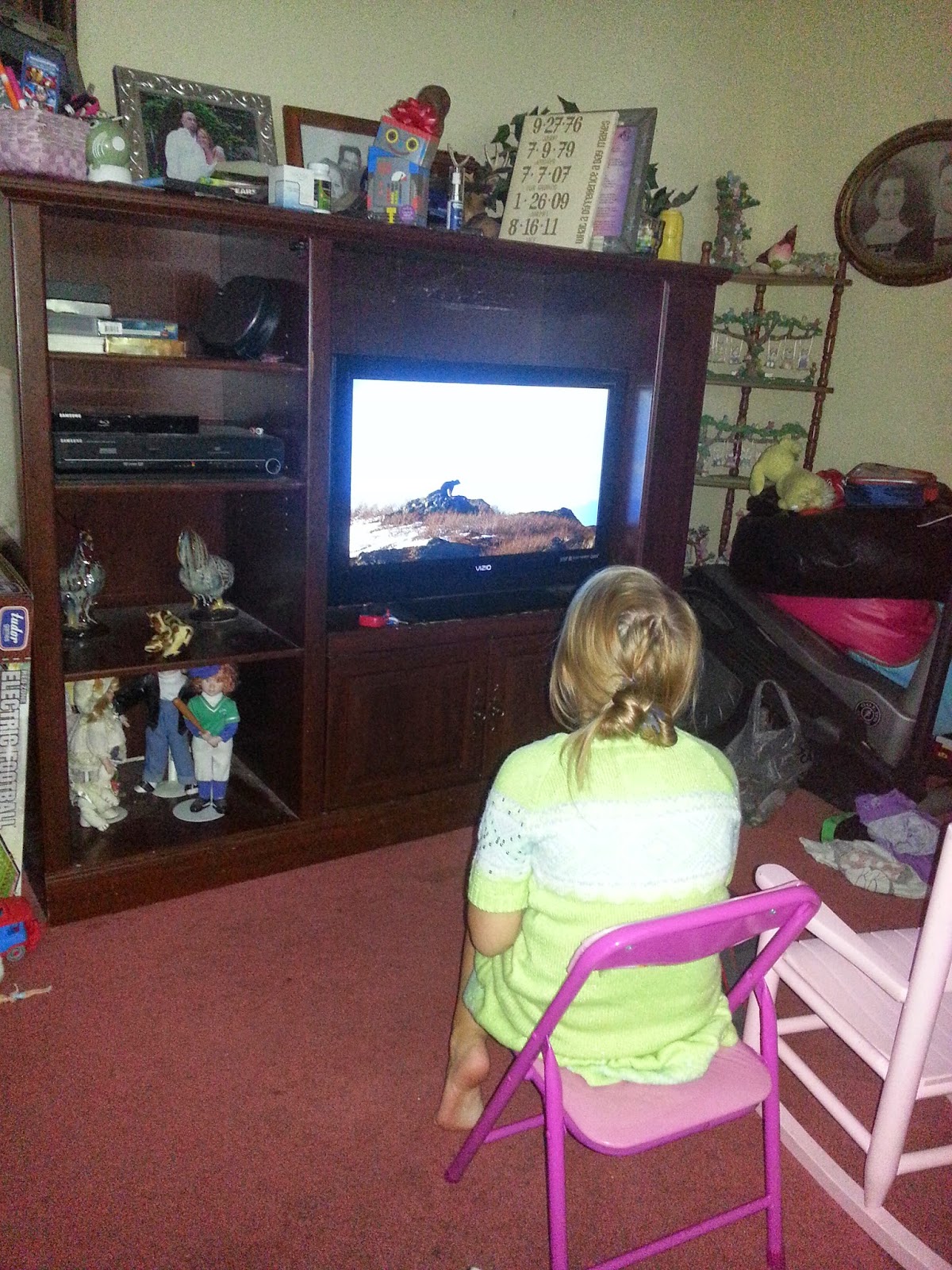 My daughter actually sat down for this one and just loved it!!! 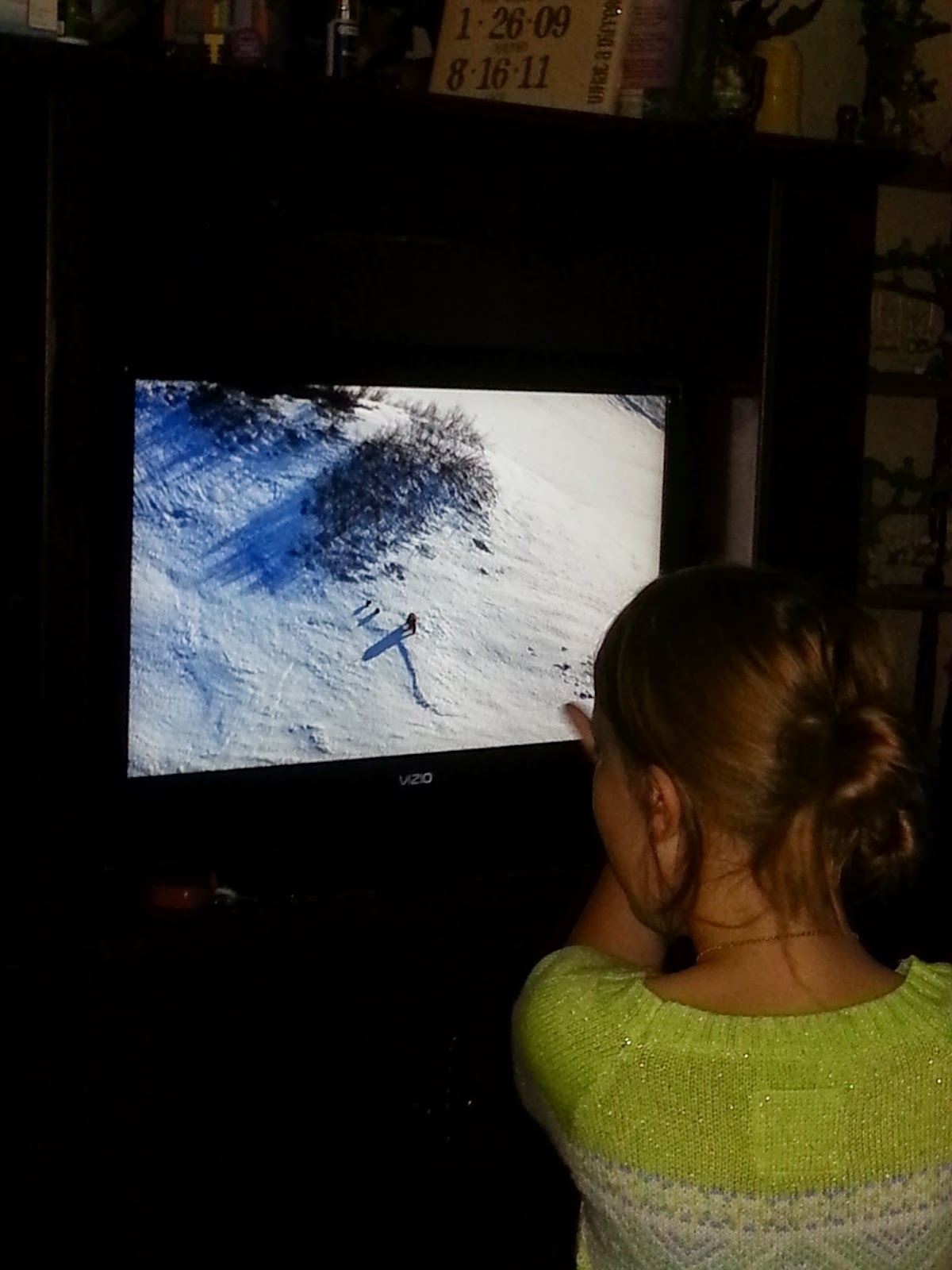 All in all this was a excellent movie to watch with the kid's and I would definitely watch it over and over again. It is interesting every time. 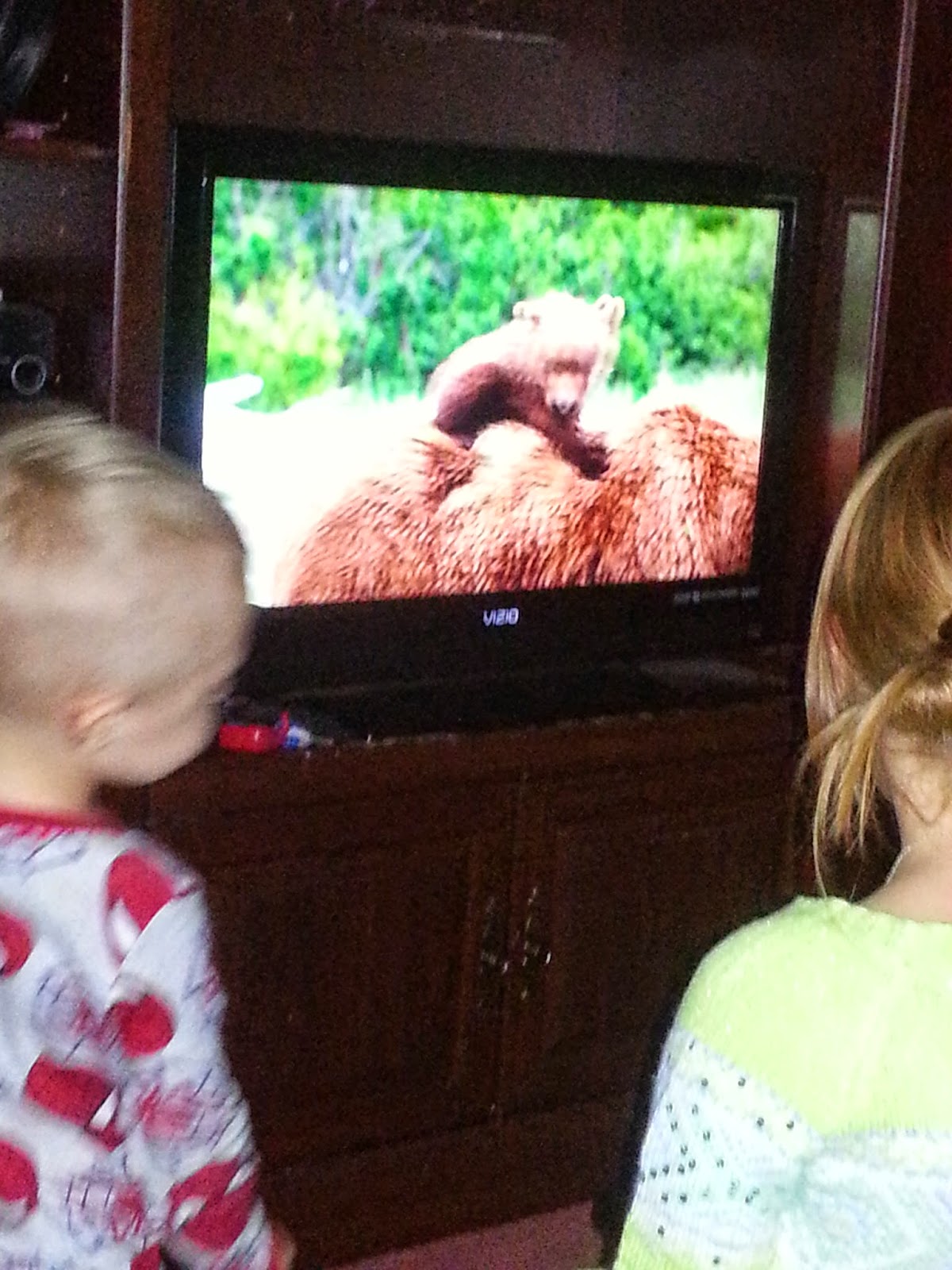 FROM THE STUDIO THAT BROUGHT YOU
“Earth” and “Chimpanzee”

To celebrate the in-home debut of “Bears,” Disneynature is proud to continue the conservation program initiated with the film’s theatrical release. For every purchase of the movie through August 19, 2014, Disneynature will make a donation through the Disney Worldwide Conservation Fund to the National Park Foundation, the official charity of America’s national parks, to further protect and conserve endangered or threatened wildlife and wild places as well as enhance field research across more than 2.9 million acres of National Park Service land.

Bonus features on the “Bears” Blu-ray™ Combo Pack, and Digital HD include the music video for “Carry On,” featuring Olivia Holt, and four making-of featurettes, including “Welcome To Alaska,” which tracks the filmmakers as they set forth on an epic journey to film Sky and her cubs out in the wilds of the Alaskan frontier; “The Future For The Bears,” which spotlights a special visit to the film’s production from legendary primatologist and conservationist Jane Goodall; “A Guide to Living With Bears,” which introduces viewers to the guides who instructed the filmmakers on how to work with these magnificent creatures; and “How Did They Film That?,” which provides an inside look on some of the extreme filmmaking that went into getting shots high in the mountains and under frigid cold water.

This must-own Disneynature true life adventure can be experienced in the following formats with bonus features as listed: 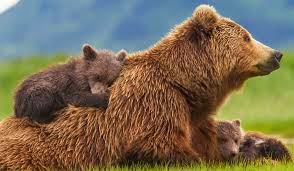 ABOUT DISNEYNATURE:
Disneynature was launched in April 2008. Its mission is to bring the world’s top nature filmmakers together to share a wide variety of wildlife stories on the big screen in order to engage, inspire and educate theatrical audiences everywhere. Walt Disney was a pioneer in wildlife filmmaking, producing 13 True-Life Adventure motion pictures between 1948 and 1960, which earned eight Academy Awards®. The first four Disneynature films, “Earth,” “Oceans,” “African Cats” and “Chimpanzee,” are four of the top five highest overall grossing feature-length nature films to date, with “Chimpanzee” garnering a record-breaking opening weekend for the genre. Disney’s commitment to conservation is a key pillar of the label and Disneynature films empower the audience to help make a difference. Through donations tied to opening-week attendance and week 1 Blu-ray sales for all four films, Disneynature, through the Disney Worldwide Conservation Fund, has planted three million trees in Brazil’s Atlantic Forest, established 40,000 acres of marine protected area in The Bahamas, protected 65,000 acres of savanna in Kenya, protected nearly 130,000 acres of wild chimpanzee habitat, educated 60,000 school children about chimpanzee conservation and cared for chimpanzees. For more information about Disneynature, like us on Facebook: facebook.com/Disneynature and follow us on Twitter: twitter.com/Disneynature.

ABOUT THE WALT DISNEY WORLD CONSERVATION FUND:
The Disney Worldwide Conservation Fund works to inspire people and partnerships to protect the world’s wildlife and to connect kids to nature to help develop lifelong conservation values. To date, DWCF has granted more than $18 million to support conservation programs in 112 countries, including funding to support community conservation programs to protect lions, cheetahs and chimpanzees. More information about DWCF’s efforts for wildlife, wild places and the people so closely linked to their survival can be found at disney.com/conservation. The DWCF also maintains the Rapid Response Fund, which has provided emergency funding to more than 160 relief efforts.

ABOUT THE NATIONAL PARK FOUNDATION:
The National Park Foundation is the official charity of America's national parks and nonprofit partner to the National Park Service.  Chartered by Congress in 1967, the National Park Foundation raises private funds to help PROTECT more than 84 million acres of national parks through critical conservation and preservation efforts, CONNECT all Americans with their incomparable natural landscapes, vibrant culture and rich history, and INSPIRE the next generation of park stewards. Find out more and become a part of the national park community at www.nationalparks.org.

ABOUT DISNEY MOVIES ANYWHERE (DMA):
Disney Movies Anywhere (DMA) is a cloud-based digital movie service that offers a hassle-free way for consumers to buy, watch, and manage Disney digital content across platforms and devices via the easy-to-use DMA app or at DisneyMoviesAnywhere.com. A DMA-eligible digital title purchased from an iTunes-connected account or redeemed in DMA will be accessible in a user’s DMA and iTunes lockers. There are currently over 400 films from Disney’s rich history available through DMA for streaming and download, including Disney Branded Animation, Disney Live-Action, Pixar, and Marvel titles, along with exclusive, original content. For more information or to redeem Digital Copy codes to build your library and earn Disney Movie Rewards Points for digital purchases, visit DisneyMoviesAnywhere.com.