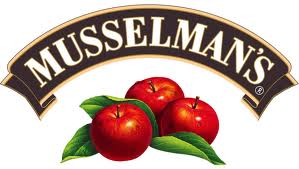 All I have to say about this apple sauce is yummy. Well I guess you are probably thinking apple sause is apple sauce but not this one. I am not a huge fan of apple sauce anyway it's weird cause I like apples and apple juice but not a big fan of apple sauce. Well I can now say since I have tried this I absolutely love this apple sauce. Being how I am not a big fan I am not sure if other apple sauce companies make their's this way but the kind I liked the most was the Chunky apple cinnamon it was delicious it kind of reminds me of the apples in apple pie. Well anyway I was and still am trying to saver what is left of it hoping I could find it at the store. I found the musselman brand at walmart the chunky kind but none of the cinnamon flavor. Maybe they will have it soon I hope. Check out Musselmans and see what I am talking about besides this brand I haven't seen chunky apple sauce anywhere else.

It all started in 1907, when John S. Musselman, Sr. and his two sons, John Jr. and Christian High, purchased the Biglerville Canning Company, located in the heart of Pennsylvania apple country. Four short years later, Christian and his wife, Emma, became the sole owners.

Following a successful first year of running the company, Christian and Emma began building a second canning facility in Gardners, Pennsylvania. The plant was up and running by 1913. This new plant, and the original one in Biglerville, provided much needed canned goods for the servicemen during World War I, including corn, tomatoes and sliced apples.
As the company became more successful, and the demand for their products increased, Mr. Musselman decided that it was necessary to build a third plant. So in 1920, construction began on a large canning facility and vinegar distillery in Inwood, West Virginia. One of Mr. Musselman's greatest achievements would occur at this plant. With the ongoing war, there was no machinery available to manufacture apple sauce; so Mr. Musselman, being the entrepreneur that he was, built his own. By 1934, Musselman's apple sauce production had tripled.

Mr. Musselman was also keenly interested in agriculture and soil development. He pioneered several new and valuable soil development methods. In the early 1920's, his crop rotation discoveries led to the first ever planting of Montmorency Red Tart Cherries in the area. Cherries were always one of Mr. Musselman's favorites.
In 1928, a preserves plant was built in Biglerville for the manufacturing of apple butter and jellies. 1929 was a big year for Musselman's. In that year, they began canning cherries and started their own trucking fleet that shipped Musselman's products all over the eastern United States. After all, a great product should be shared.
The Musselman family, devout Mennonites of Pennsylvania Dutch descent, was inspired by much more then producing good food. They felt a keen sense of community obligation and created the Musselman Foundation in 1942. Over the course of 65 years, the foundation has continued to support the local communities by donating to schools, colleges, libraries, and hospitals.

I am now a apple sauce fan but only if I can find the chunky apple sauce it's the best!!! Take it from me I love it!! 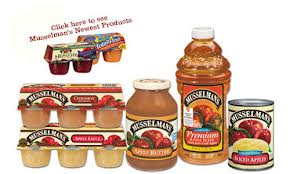