In support of DREAMWORKS HOME: ADVENTURES WITH TIP & OH! Season 2 coming to Netflix on this Friday, January 27, DreamWorks Animation Television and Netflix have released 2 new clips! See the link to it below.

DETECTIVE TUCCI AND A SUSPICIOUS BOOV 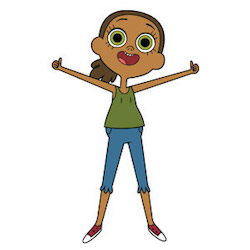 Synopsis
Tip and Oh – the two best friends from two very different worlds – are back with more heart, hilarity, catchy tunes and fun-filled adventures for 13 all-new episodes of DREAMWORKS HOME: ADVENTURES WITH TIP & OH! These besties prove their friendship is only getting stronger as they explore human and alien worlds with unexpected and surprising results. Whether camping, concert-going or discovering inside jokes, Tip and Oh are inseparable friends tackling any situation with a lot of love, a ton of laughter and a few delightful duets when Season 2 premieres on January 27, only on Netflix.

About DreamWorks Animation Television:
DreamWorks Animation Television is one of the world's leading suppliers of high-quality, animated family programming, reaching consumers on linear and on-demand platforms in more than 130 countries and garnering 31 Emmy Awards to date.  It is a division of the Universal Filmed Entertainment Group (UFEG).
About Netflix:
Netflix is the world’s leading Internet television network with over 83 million members in over 190 countries enjoying more than 125 million hours of TV shows and movies per day, including original series, documentaries and feature films. Members can watch as much as they want, anytime, anywhere, on nearly any Internet-connected screen. Members can play, pause and resume watching, all without commercials or commitments.