My daughter was so excited to get Snow White her face lit up so much and I was excited for Snow White too. Out on Dvd on February 2nd this is one of my favorite movies as a kid and now it's one of my daughters this is the first time on Digital Hd this Dvd also includes Original recordings of walt disney & more. This is the signature of the walt disney collection. 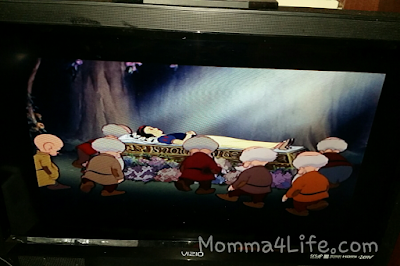 I have to say when we first got this Dvd both kids laid down and watched the who thing. If you are a Disney fan you can't miss this opportunity if you are able to get this on Dvd.

I loved snow white the seven dwarfs as a child and I love them still and this movie was amazing and it's just a classic!! 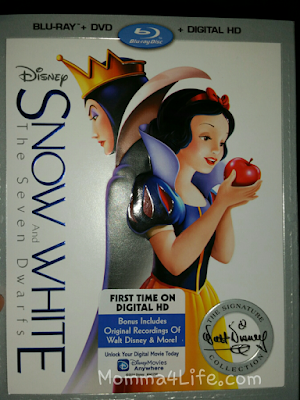 Marking the launch of The Walt Disney Signature Collection

Featuring In-Depth Brand New Bonus Material Including “In Walt’s Words: Snow White and the Seven Dwarfs,” “Iconography,” “@DisneyAnimation: Designing Disney’s First Princess,” “The Fairest Facts of Them All: 7 Facts You May Not Know About Snow White,” “Snow White in Seventy Seconds,” “Alternate
Sequence: The Prince Meets Snow White” and Much More!

Synopsis:                     Forever enchanting and inspiring, Snow White And The Seven Dwarfs embodies The Walt Disney Signature Collection’s legacy of animation.  In this epic story of love and friendship, the kind and beautiful princess Snow White wins the hearts of the Seven Dwarfs and triumphs over the evil plans of a wicked Queen.  Share the movie called “The Greatest Animated Film Of All Time," (American Film Institute) in High Definition Blu-ray and for the first time ever on Digital HD, with special features for the entire family! 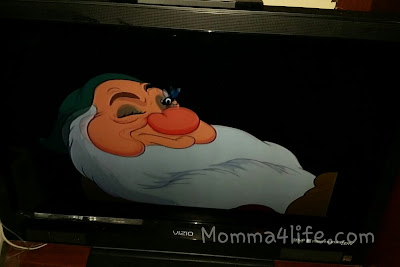 Blu-ray & Digital*
Bonus Features:          In Walt’s Words: Snow White and the Seven Dwarfs – For the first time ever, hear Walt himself talk about Snow White.

Iconography – Explore how this film influences pop culture, art, and fashion.
@DisneyAnimation: Designing Disney’s First Princess – Modern day Disney artists discuss the design of Snow White and how it influenced the look of some of your favorite Disney characters.

The Fairest Facts of Them All: 7 Facts You May Now Know About Snow White – Disney Channel star Sofia Carson reveals seven intriguing facts about Snow White.

Snow White in Seventy Seconds – Rap along with this hip reimagining of the story.

*Digital bonus offerings may vary by retailer
And much more! 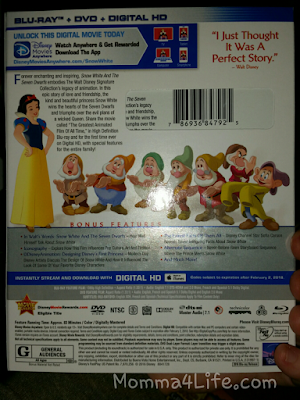 About Disney Movies Anywhere (DMA)
Disney Movies Anywhere (DMA) is an engaging and family-friendly cloud-based digital movie service that makes it simple to buy your favorite Disney, Pixar, Marvel and Star Wars movies once and watch them anywhere.  With DMA you can explore Disney’s library of over 450 eligible digital movies, discover hours of new and exclusive short-form content, and watch your digital movies from the comfort of the living room or across multiple mobile devices.  Using the free DMA apps and website, consumers can connect their DMA account with participating providers including iTunes, Amazon Video, VUDU, Microsoft Movies and TV and Google Play and unlock access to your eligible movie collection across platforms and devices –  iPhone, iPad, iPod Touch, Apple TV/Airplay, Amazon’s Fire tablets, Fire TV and Fire TV Stick, Microsoft Movies and TV service on Windows and Microsoft Xbox devices, Android TV, Chromecast and the Roku platform.  In addition, you can redeem Digital Copy codes found in Disney, Pixar and Marvel Blu-rays and DVDs, as well as earn Disney Movie Rewards points with every digital purchase.

WALT DISNEY ANIMATION STUDIOS
Combining masterful artistry and storytelling with groundbreaking technology, Walt Disney Animation Studios is a filmmaker-driven animation studio responsible for creating some of the most beloved films ever made. Located in Burbank, WDAS continues to build on its rich legacy of innovation and creativity, stretching from the first fully-animated feature film, 1937's Snow White and the Seven Dwarfs, to 2013's Academy Award®-winning Frozen, (Best Animated Feature Film, 2013) the biggest animated film of all time. Among the studio's timeless creations are Cinderella, Sleeping Beauty, The Jungle Book, Beauty and the Beast, The Lion King, Tangled and the Oscar®-winning Big Hero 6 (Best Animated Feature Film, 2014).
on February 01, 2016