Announce* Dolph Lundgren Stars In KINDERGARTEN COP 2 on DVD, Digital HD and On Demand May 17 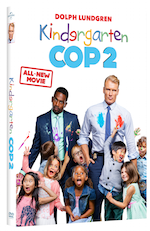 AVAILABLE ON DVD, DIGITAL HD AND ON DEMAND MAY 17, 2016
FROM UNIVERSAL PICTURES HOME ENTERTAINMENT

Universal City, California, February 16, 2016 – A family favorite gets reimagined in Kindergarten Cop 2, a fish-out-of water comedy available on DVD and Digital HD as well as On Demand on May 17, 2016, from Universal Pictures Home Entertainment. Directed by Don Michael Paul (Jarhead 2: Field of Fire, Tremors 5: Bloodlines), Kindergarten Cop 2 stars action superstar Dolph Lundgren (The Expendables 3, Workaholics) and Bill Bellamy (White Collar, Royal Pains) along with an adorable ensemble of young actors and is bursting with laughs for the entire family.

Assigned to recover sensitive stolen data, a gruff FBI agent (Dolph Lundgren) goes undercover as a kindergarten teacher, but the school’s liberal, politically correct environment is more than he bargained for.

The Kindergarten Cop 2 DVD and Digital HD will delight longtime fans and new viewers alike with hilarious bonus features including deleted scenes, a gag reel and a behind-the-scenes look at the making of the film.

About Universal 1440 Entertainment:
The Universal 1440 Entertainment banner develops and produces live-action and animated non-theatrical productions directly for distribution in all media worldwide. Since its formation in 2005, the group has assembled an exceptional roster of animated family fare, including the animated feature-length film The Little Engine That Could; the Daytime Emmy®–winning Curious George television series on PBS KIDS; and a string of hit Barbie movies, based on the world-renowned Mattel-branded doll. The group also has successfully built upon some of Universal’s highly celebrated live-action franchises, more recently launching the Tony Award®–nominated hit touring stage production Bring It On: The Musical; the legendary action-adventure Scorpion King 4: Quest for Power; the adrenaline-fueled actioner Death Race 3: Inferno; the terrifying suspense saga Curse of Chucky; and the epic sci-fi adventure Tremors 5: Bloodlines. Among projects currently readying for release are the exhilarating action-thriller Hard Target 2 and the high-energy dance drama Honey 3.