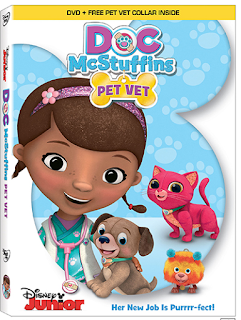 We were really excited to get Doc McStuffins pet vet when we first got it they were ready to watch it right away. I put it in for them while we were eating dinner and they couldn't keep their eyes off of it. What it's about Doc McStuffins opened a new veterinarian practice in her backyard where she treats stuff animals and shows lessons about learning how to care of pets. This DVD includes a pet collar for your child one side looks like a Band-Aid and the other side looks like a collar both kids were really excited about this. 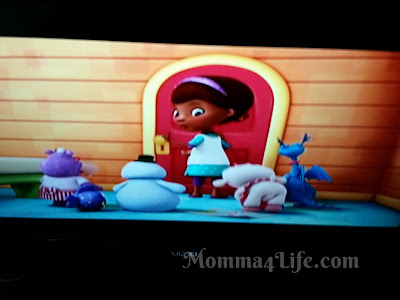 This DVD is really great for children of all ages it teaches them responsibility and other active lessons. Even my little niece that is one years old likes sitting down and watching this.

Out now this is going to be a great hit for any children. Now this also will be a perfect holiday gift for any child between the ages of 1 to 7 maybe even older I know my daughter loves it and she's only six. If your child has been asking you about a pet and you've been thinking about it this DVD would be a perfect one to watch before going out and picking out a pet. 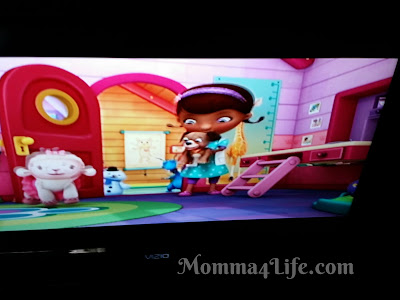 So all in all the kids loved this DVD and I Highly recommend it if you have a little one that likes Doc McStuffins or possibly have never even heard of Doc McStuffins they would absolutely love this DVD.


Doc and the Toys Highlight
Lessons About Care and Responsibility for Pets In:

ABOUT THE WALT DISNEY STUDIOS:

For over 90 years, The Walt Disney Studios has been the foundation on which The Walt Disney Company was built. Today, the Studio brings quality movies, music and stage plays to consumers throughout the world. Feature films are released under the following banners: Disney, including Walt Disney Animation Studios and Pixar Animation Studios; Disneynature; Marvel Studios; Lucasfilm; and Touchstone Pictures, the banner under which live-action films from DreamWorks Studios are distributed. The Disney Music Group encompasses the Walt Disney Records and Hollywood Records labels, as well as Disney Music Publishing. The Disney Theatrical Group produces and licenses live events, including Disney on Broadway, Disney On Ice and Disney Live!