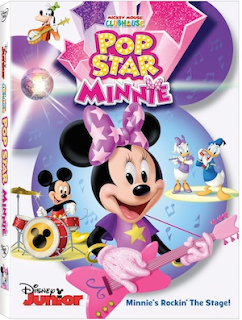 Synopsis:                                 Hop Aboard The Magical, Musical, Clubhouse Tour Bus!  Minnie’s dream of singing onstage is about to come true — until her Clubhouse back-up band pals discover that their musical instruments are gone! Now, the race is on to track them down and reach Melody Mountain by sunset. But, even if they find the missing instruments in time, should Minnie sing the blues, croon a country tune or boogie to a disco beat? It’s going to take help from YOU – plus a few Mouseketools – to get Minnie in the right groove to totally rock out! Bursting with fun, surprises, and four more exciting adventures, Pop Star Minnie is simply song-sational!