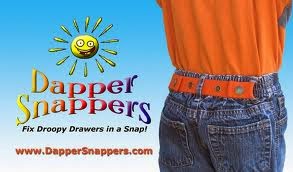 Have you ever heard of Dapper Snappers they are really cool toddler belts that are just a little different then regular belts you would see in the store. My son and daughter are both the same even thought my son is on the smaller side. I always find jeans that are perfect in height for them but then when it comes to around the waist it is so big and then we see crack. I use a belt but that doesn't always work it helps but doesn't get rid of it completely. Well then I heard of the dapper snapper these belts are awesome they are different in the sense that they pull the back of the jeans together. I like that they focus on the back of the pants rather then the front.

Dapper Snappers are awesome kids belts, toddler belts, baby belts, and accessories in case you don't have belt loops. The kids belts have a bottle opener style buckle for the girls belts and a magnetic buckle for the boys belts. Baby and toddler belts don't have buckles to get in the way of potty training or diaper changing. Instead the toddler and baby belts just slip through the beltloops on the back of the pants. You don't need adjustable waistband pants after all! If you don't have belt loops, you can use the Dapper Snappers Add-on Clips. Also available; Mom's belts, pregnancy belts, and post-partum belts. Dapper Snappers have the children's accessories you need!
Along with our Kids Belts, we have Girls Belts, Boys Belts, Belts for Kids, Children’s Belts, Elastic Belts, Elastic Belts for Kids, and Kids Elastic Belt. Our Adult Belts or Belts for Adults can also be used as Special Needs Belts, Belts for Teens, Teens Belts.
So if you are looking for belts for toddlers or for preschoolers, adjustable belt, or belts that will go with your girls clothes or boys clothes, you will LOVE Dapper Snappers.

Would you like to win a Dapper Snapper of your own??? Follow the Rafflecopter Below for your chance to win!!!!!

I received one or more of the products mentioned above for free using Tomoson.com. Regardless, I only recommend products or services I use personally and believe will be good for my readers.
a Rafflecopter giveaway
on May 26, 2014