From the Arctic Circle to Times Square

Experience even more exhilarating adventure with special features including deleted scenes, outtakes, “The Arctic Shake” sing-along and a trivia challenge for the whole family to enjoy! The Norm of the North Blu-ray Combo Pack and DVD will be available for the suggested retail price of $34.99 and $29.95, respectively.
For artwork, please visit www.lionsgatepublicity.com/home-entertainment/normofthenorth/
Trailer: https://youtu.be/uqBtDMQNnh4
Website: www.NormoftheNorth.com
Facebook: www.Facebook.com/NormoftheNorthMovie 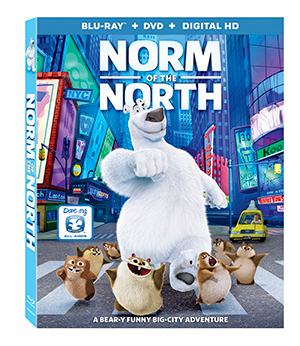 ABOUT LIONSGATE
Lionsgate is a premier next generation global content leader with a strong and diversified presence in motion picture production and distribution, television programming and syndication, home entertainment, digital distribution, new channel platforms, video games and international distribution and sales. The Company has nearly 80 television shows on 40 different networks spanning its primetime production, distribution and syndication businesses.  These include the critically-acclaimed hit series Orange is the New Black, the multiple Emmy Award-winning drama Mad Men, the hit broadcast network series Nashville, the syndication successes The Wendy Williams Show and Celebrity Name Game (with FremantleMedia), the breakout series The Royals and the Golden Globe-nominated dramedy Casual.

Its feature film business has been fueled by such successes as the blockbuster Hunger Games franchise, the first two installments of the Divergent franchise, Sicario, The Age of Adaline, CBS/Lionsgate's The DUFF, John Wick, Now You See Me, Roadside Attractions' Love & Mercy and Mr. Holmes, Lionsgate/Codeblack Films' Addicted and Pantelion Films' Instructions Not Included, the highest-grossing Spanish-language film ever released in the U.S.

Lionsgate's home entertainment business is an industry leader in box office-to-DVD and box office-to-VOD revenue conversion rates. Lionsgate handles a prestigious and prolific library of approximately 16,000 motion picture and television titles that is an important source of recurring revenue and serves as the foundation for the growth of the Company's core businesses. The Lionsgate and Summit brands remain synonymous with original, daring, quality entertainment in markets around the world. www.lionsgate.com