Tomorrowland on Blu-ray, Digital HD and DMA Out Now Review

The kids love this movie Tomorrowland we have seen it advertised so many times and the kids were so excited to get this on Dvd. This is definitely a story of adventure. And always keeping you on your toes. My daughter keeps reminding me the girl in the movie looks like the girl from a show called Girl Meets World. This captured the kids attention. 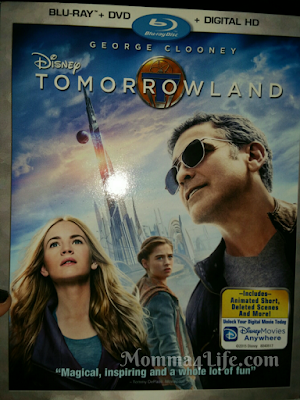 This is a movie great for the whole family to watch. I would highly suggest it and it would make a great Holiday Gift too. 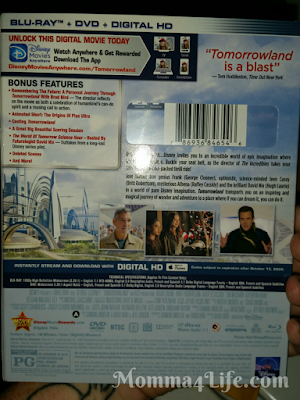 Disney Invites You to a World of Epic Adventure and Imagination

From the Director of “The Incredibles,” Blast Off with this
Family Adventure on Blu-ray™ Combo Pack, Digital HD
and Disney Movies Anywhere (DMA) October 13

SYNOPSIS:                           Dreamers Wanted…Disney invites you to an incredible world of epic imagination where anything is possible.  Buckle your seat belt, as the director of The Incredibles takes your family on an action-packed thrill ride.

Join former boy genius Frank (George Clooney), optimistic, science-minded teen Casey (Britt Robertson), mysterious Athena (Raffey Cassidy) and the brilliant David Nix (Hugh Laurie) in a world of pure Disney imagination.  Tomorrowland transports you on an inspiring and magical journey of wonder and adventure to a place where if you can dream it, you can do it.