Aladdin: Diamond Edition on Blu-ray Out Now on Dvd Review

My kids love Aladdin and now that it is out in the Diamond Edition I was really excited for them to get it. I remember watching Aladdin when I was a kid and I loved it. Every time the commercial came on to advertise for the movie the kid's will always sing a long to this. Little do they know they are getting this really soon. 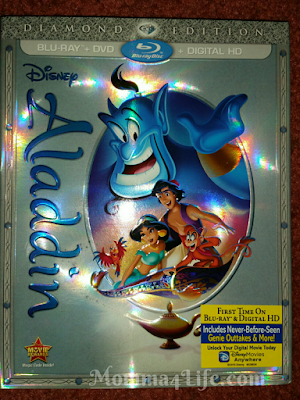 Ive seen this though and they have some never before seen genie outtakes and cute things that you would of never seen in the original. This would be a great addition to your Christmas List for your little one!! I mean come on who doesn't love Aladdin?? And now on Bluray too. 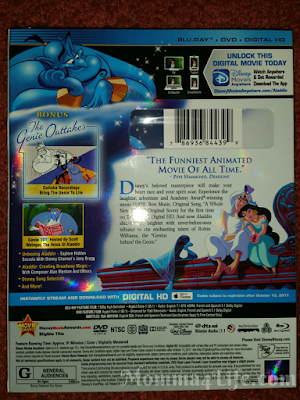 Synopsis:                Soar away on a magic carpet ride of nonstop laughs and thrills in one of the most spectacular adventures on all time! Now meticulously restored and enhanced – experience the wonders of “Aladdin” like never before, from the Academy Award®-winning music (Best Music, Original Song for “A Whole New World” and Best Music, Original Score, 1993) to the unforgettable moments of sidesplitting comedy and soaring adventure.

In the heat of an enchanted city, a commoner named Aladdin and his mischievous monkey Abu battle to save the free-spirited Princess Jasmine from the schemes of the evil sorcerer Jafar. Aladdin’s whole life changes with one rub of a magic lamp as a fun-loving, shape-shifting Genie appears and grants him three wishes, setting him on an incredible journey of discovery.

Voice Cast:                     Robin Williams (Jumanji, Night at the Museum) as The Genie, Scott Weinger (TV’s “Full House”) as Aladdin, Linda Larkin as Jasmine, Gilbert Gottfried (TV’s “Saturday Night Live”) as Iago, Jonathan Freeman (Aladdin: the Musical on Broadway) as Jafar, Douglas Seale (Rescuers Down Under, For Love or Money) as Sultan and Frank Welker (Mulan, The Smurfs 2) as Abu.

ABOUT THE WALT DISNEY STUDIOS:
For over 90 years, The Walt Disney Studios has been the foundation on which The Walt Disney Company was built. Today, the Studio brings quality movies, music and stage plays to consumers throughout the world. Feature films are released under the following banners: Disney, including Walt Disney Animation Studios and Pixar Animation Studios; Disneynature; Marvel Studios; Lucasfilm; and Touchstone Pictures, the banner under which live-action films from DreamWorks Studios are distributed. The Disney Music Group encompasses the Walt Disney Records and Hollywood Records labels, as well as Disney Music Publishing. The Disney Theatrical Group produces and licenses live events, including Disney on Broadway, Disney On Ice and Disney Live!
# # #
on October 14, 2015