Lost Civilization 10 Societies that Vanished Without a Trace Review

This is such a interesting book if you are into these type of books then you will love this mystery. This book is about how the great societies vanished!! My dad also loves books like this history books and learning about what happened in the past.

From the #1 bestselling author of History's Greatest Generals comes an exciting new book on the greatest societies in history that vanished without a trace, and why their disappearance still haunts us today. 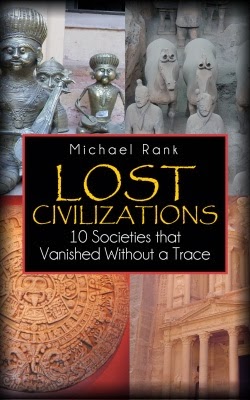 Whether it is Plato's lost city of Atlantis, a technological advanced utopia that sank into the ocean "in a single day and night of misfortune"; the colony of Roanoke, whose early American settlers were swallowed up in the wild forest lands of the unexplored continent, or the Ancient American Explorers, who managed to arrive to the New World 2,000 years before Columbus, the disappearance of these societies is as cryptic as it is implausible.

This book will look at cultures of the 10 greatest lost civilizations in history. Some were millenia ahead their neighbors, such as the Indus Valley Civilization, which had better city planning in 3,000 B.C. than any European capital in the 18th century. Others left behind baffling mysteries, such as the Ancient Pueblo Peoples (formerly known as the Anasazi), whose cliff-dwelling houses were so inaccessible that every member of society would have to be an expert-level rock climber.

It will also at explanations as to how massive societies that lasted for centuries can disappear without a trace. Did the builders of the pyramids handy craftsmen whose method of transporting massive stones are still unexplainable simply disappear or were they part of an advanced alien race, as conspiracy theorists assert? Was the Kingdom of Aksum really the keeper of the Ark of the Covenant, and did this lead to their downfall?

Whatever the nature of their disappearance, these lost civilizations offer many lessons for us today -- even the greatest of societies can disappear, and that includes us.


I received one or more of the products mentioned above for free using Tomoson.com. Regardless, I only recommend products or services I use personally and believe will be good for my readers.
on January 21, 2014